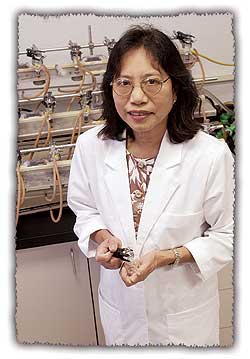 "I needed to change careers. I needed progression in my life."

Editha Chan always had an interest in medicine and biology, and a natural flair for the sciences, but she was never certain how she could best put her interests to use.

When she came to the United States from the Philippines 20 years ago, Editha couldn't afford an expensive education or many years of medical training, so she did the best she could, working in medical facilities, learning as she went along, doing as she much as she was allowed.

"I was working in different jobs, and knowing that I wanted to do more, and had the talent and knowledge to do more," Editha says. "I realized, even though I wasn't as young as I once was, it was time for me to go to school."

Editha had worked in Virginia, Los Angeles and San Diego, but it was San Diego that became her permanent home. She enrolled in the biotech program at Miramar College, prepared to make the transition from medical assisting jobs to biotech pursuits. Editha completed the program, and now works in skin and drug research at Dermtech International in Rancho Bernardo.

"I had given enough vaccines in my life," Editha says, laughing. "I wanted to work more in molecular biology, studying science, which I had loved for as long as I can remember."

Editha says progress is important to her. She says that given the continuing breakthroughs in medical technology, there will always be new issues and methods for her to follow. She says she will continue to educate herself through classes and workshops, and looks to find new areas to explore in her new career.

"I learn something new all the time here," she says. "Going to college opened up avenues for me. Now the people I work with teach me and share their experience. That's what science is all about. It's the collaboration that makes it so rewarding."