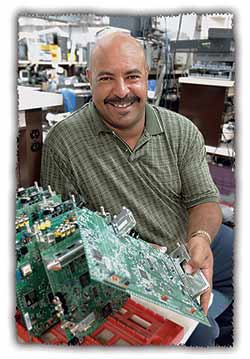 "With two little kids to support, work-study enabled me to finish the education I started."

Like many veterans before him, US Navy electrician Irvin Harris didn't find post-military life wired for success.

"After the Navy, I worked in security, some dead-end jobs," Irvin says. "I decided school was the best place for me."

Irvin enrolled in an electronic test technician class at Centre City Center, where his past electrical experience helped him, and he flourished in the class. From there, Irvin transferred to City College's electronics program, having used his Centre City Center experience as a stepping stone to higher learning.

"I was in charge of the electronics lab at City," Irvin says. "I worked there while I went for my bachelor's degree."

After completing his engineering math and physics course work at City College, Irvin had transferred to San Diego State University, where he earned his degree in electrical engineering in 1997.

Through it all, Irvin struggled to earn money while raising his growing and supportive family. They went through through tough financial times, but Irvin realized his education was vital to changing all of their lives. By the end of college, Irvin was exhausted, but ready for the rewards of his hard work.

Irvin then landed an engineering job at General Instruments in San Diego, a company that became a part of industry giant Motorola.

"I started there about a year before I graduated," Irvin says. "I've worked my way up to staff engineer."

Irvin now works on some of the company's biggest projects, including analog to digital conversions and other projects for such companies as ESPN, HBO, CBS and MSNBC.

As he helps large companies transition to a new electronic world, Irvin thinks back to the days when he was making transitions himself.

"I was on financial aid when I was going to school, and there were some trying times," he says. "What helped was my work study at City. They opened up a position for me, and that allowed me to keep going."