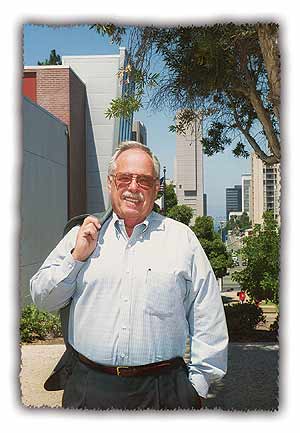 "I wasn't always focused, but I was able to change, and that happened in college."

When Jim Sinegal was a student at what was then known as San Diego Junior College , he and other young students looked to the just-returned Korean War veterans for inspiration.

"These were people who had seen so much, who had been matured by the war," Jim says. "We learned a lot by how they carried themselves."

Jim was also a vice president of merchandising for Builders Emporium, and began his retail career in San Diego with the Fed-Mart organization.

After graduating from Helix High School in 1953, Jim attempted to attend San Diego State University, but was advised he might be better served attending a two-year program first.

"My test scores were good, but my grades weren't that good, because I needed focus," Jim says. "It was at San Diego Junior College (now City College) where I regained that focus, and paid attention, because deep down I knew education was important."

After transferring to SDSU, Jim gained business education knowledge, began working for Fed-Mart, and eventually met Price Club founder Sol Price. He would go on to help found one of the great wholesale companies in industry history, a story that continues to this day. That's one of the reasons he was recently chosen as a Most Distinguished Alumnus by City College.

"I've never been told I'm a most distinguished anything," Jim says, joking.

He now recalls his San Diego Junior College days fondly. "It was a fantastic time for me," says Jim, who still visits frequently. "The college continues to play a big role in the city, and is an asset to the community."