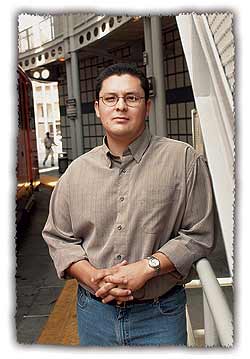 "I know the math field isn't popular with everybody, but my love for math grows all the time."

For Julio Villareal, City College plus his father's encouragement was an equation that added up to academic success.

After high school, Julio had considered joining the military, but his father, David, who works in maintenance at City College and is a former City student himself, talked his son into attending the college.
"It was a good place for me because I learned a study ethic," Julio says. "I was taught about discipline."

The discipline carried Julio to earn an associate's degree in liberal arts, with an emphasis in math, then on to the University of San Diego, where he earned his bachelor's degree in math.

"I had lost interest in math in high school, because I guess I was just bored with school altogether," Julio says. "But taking math classes at City College renewed my interest. I realized again it was something I could be good at doing."

From USD, Julio traveled to Cornell University in upstate New York, where he earned his master's of science degree in biometery and statistics. Julio is a doctoral candidate in mathematics at Cornell, though he is currently on hiatus from his education and working at EdVision in San Diego.

"It's a software firm," Julio says. "I work on the educational math content here, and enjoy the work very much."

Julio looks back at his education and admits there were struggles. "Not having a lot of money to go to school, I knew how rewarding it would be for me to finish," Julio says. "I knew that if I did well in math, scholarship opportunities would present themselves."

Julio and his wife now tutor math to young people in their church group. "The parents offer to pay me, but I say no," Julio says. "I tell the kids that payment for me is when they do well in their education."