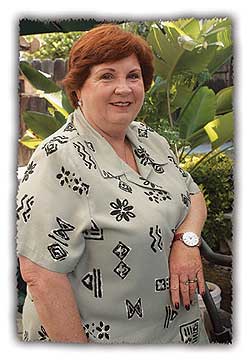 "I came to believe in myself. I learned not to be intimidated by my insecurities."

She was cleaning houses and not thinking about a career in any field, much less about an advanced education.

Linda Reed had been told her learning disability was a barrier for future academic success, but when one of her friends became a tutor at Miramar College, the friend offered encouragement.

"She told me, 'Linda, you're smart. You can go to college,'" Linda says. "She really believed that, so I started to wonder. I took a placement test, and was so worried that I could barely write a sentence. I asked them if I should go home because I failed. They told me this wasn't a test I could fail, it was just to see where I should begin. It was only the beginning."

Linda says she spent a lot of time at The PLACe at Miramar College, where she refined her reading and speaking skills. "They realized I had an eye-tracking problem," Linda says. "They provided me with puzzles to help me solve the problem."

Linda became a tutor, and eventually supervisor of the Toddler Village at the Polinsky Children's Center in San Diego. She is now an officer for the San Diego County Protective Services Agency.

"It puts me in a better place to help," Linda says. "I'm interested in helping young people find long-term placement."

Linda was once a single teen mom, but is now married, the mother of three and the grandmother of 10. One of her granddaughters attends Miramar.

"I want to teach," Linda says. "I want young people, especially those with learning disabilities, to know the community colleges can do for them what they did for me."