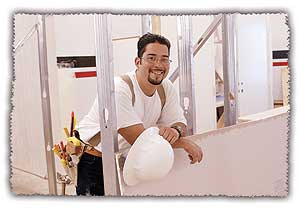 "I don't want to learn just one thing about construction. I want to know the whole trade."

On gorgeous Southern California mornings, Rodney Pimentel looks up to the clear blue skies and realizes it's good to be outside, alive and free.

Rodney has a special perspective, having recently been released on parole from state prison in northern California. Rodney grew up in the sometimes tough streets of east San Diego, perhaps not always choosing the right path, but now ready to get on with his life and learn a trade.

After six years in prison, Rodney was deemed ready to rejoin society, and he has done so with a positive spin, enrolling in the college district's apprentice program sponsored by the local Association of General Contractors.

Rodney has completed the first phase of the program, in taping, and is now looking to learn more about drywall lath.

"I've always liked architecture and the things in construction that go along with architecture," Rodney says. "I figured the best way to know all about buildings was to learn how they were designed and built from start to finish."

A family member recommended the AGC program to Rodney, who signed up and began taking classes while also working professionally in the field at different job sites.

"This kind of program is good for anybody who wants to move up in construction," Rodney says. "It was especially good for me, a way to get a new beginning."

Rodney says he has serious aspirations for continuing in construction, perhaps moving toward work as a superintendent, project manager or general contractor. By combining classroom and field experience, Rodney hopes to become more well-rounded, and learn from some of the best. He also likes the idea that, given the increasing cost of housing in San Diego, he is gaining the necessary experience to perhaps build his own house someday.

"What's exciting is this is the kind of business where there is no end to where you can go," Rodney says. "Work hard and learn, and the sky is the limit."