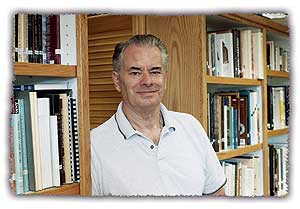 "The first time I saw a mummy, I was 10 years old, and it scared the hell out of me. I've been fascinated ever since."

As a youngster, Ron Fellows was frightened by the sight of a mummy at the legendary Field Museum in Chicago, but since then this expert in Egyptian artifacts has certainly conquered those fears.

Ron worked for 38 years as a cost estimator for Rohr Industries in San Diego, before retiring a few years ago with plans to confront his childhood combination of fear and fascination. Ron signed up for Arelene Wolinski's class in the history of ancient Egypt at Mesa College, and was hooked all over again. He now has a post-retirement career leading tours of Egypt, with an emphasis on hieroglyphics, and has co-written a book called Hieroglyphs for Travelers.

Ron is the editor of The Glyph, the Egyptian-flavored content newsletter of the Architectural Institution of San Diego, and it was an advertiser in that newsletter, a man who ran a tour agency in New Jersey, who suggested Ron become part of the team.

"He says, 'Why don't you lead tours of Egypt?'" Ron says. "We talked about it for awhile, then off we went."

Ron says he does what he does not only to further his own education, but also to help others do the same. "I do this so people who go over there can understand what they are looking at," he says. "A million and a half people go to Egypt every year, but our tours go to places that most of the people miss, secret places where once only kings and princes were allowed to go."

Ron has plans with his academic partners to expand the tours to Turkey, Syria and Lebanon. And it was his class at Mesa that jump-started his new globe-trotting energy and second career.

"The class was fantastic," Ron says. "Arelene knows a great deal about history, and I found out there is always more to learn."