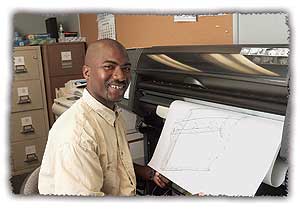 "There were times when I had to make the choice between partying and studying. Mostly, I studied."

He's not five years old anymore, but when Shawn Burns sees anything from a simple cylinder to complex machinery he still incessantly asks, "Why?" and "How?"

"I've been that way since I was a kid," he says. "I've always looked at things and wondered what was going on inside. It's just in my nature."

Good thing then, that Shawn was able to find employment not only figuring out how things work, but also designing them so they do work.

Shawn is an engineer at Pacific Marine Corporation, where he designs everything from elaborate boxes to rocket ship parts, depending on the needs of the client.

"That's one of the things I like about engineering," Shawn says. "You can go from one project to the next and find completely different challenges."

Shawn attended high school in San Diego, then enrolled in City College in 1987, with an emphasis in biology. He transferred to Mesa College for awhile, then went back to City College, and settled on engineering.

"My father was an engineer, now retired," Shawn says. "I should have known it was where I would end up. It's a natural for me."

Shawn graduated with his bachelor's degree in engineering from Long Beach State University, came back to San Diego for a few more engineering classes at San Diego State University, then entered the work force. His office is only five blocks from City College. Shawn also regularly returns to City College to talk shop with his former professors, and takes a class when he thinks it will help him.

"You need to keep up on the latest developments," Shawn says. "Being an engineer is a lifelong learning experience. You have to stay ahead, and most engineers want to do that anyway, because they have a natural curiosity."