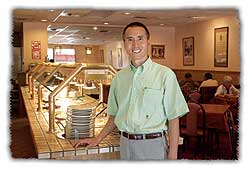 "I came looking for the American dream."

When Yam Lee arrived in San Diego from Hong Kong in 1978, he was alone, almost broke and could speak only a few words of English.

During the next 23 years, the native of China would learn to speak the language fluently, become a successful business owner and maintain a bright outlook that makes him incurably optimistic.

"When I came to this country, I only had $20," Yam says. "I went to work in a restaurant, rented a room from an American family, and they taught me English."

In 1978, Yam began taking English as a second language and citizenship classes at what was then East San Diego Center (now Mid-City Center). He later went to the Skills Center for training in ship fitting.

"I was taught the fundamentals and knowledge of marine construction," Yam says. "It was something I enjoyed."

Yam went to work for National Steel and Shipbuilding Co., working all day for the shipbuilder and continuing to work at a restaurant at night, building a nest egg. When the devastating NASSCO strike hit in 1980, Yam was prepared.

"The strike helped me decide I needed to be in charge of my career," he says.

Yam left NASSCO to open his own restaurant, the Mandarin Plaza near the Sports Arena, and begin a new career. Three years later he opened the Chinese Garden restaurant in Clairemont, then began developing shopping centers for retail use, with great success. Yam, who built a small business into a real estate empire, started as a man who simply wanted to learn the language of his new country and make the best of himself he could.

"Learning English helped me understand business and how the American culture works. Without those classes, I wouldn't be here," he says.

Yam is now married with three children, alone no more, and a respected member of the business community.

"This is the best place in the world to live," Yam says. "My American dream did come true."