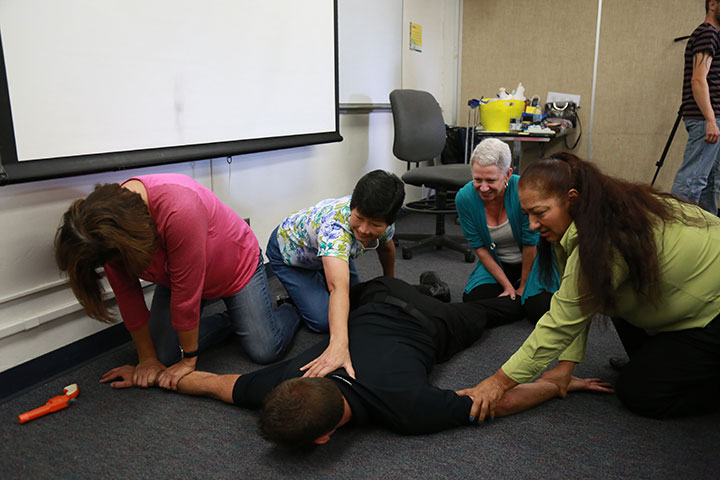 Faculty and staff at San Diego City College participate in training on how to respond to an active-shooter situation.

Police, civilians to train together in active shooter scenario

A comprehensive emergency training exercise that incorporates police response to an active-shooter situation with faculty and staff members learning the latest in evading and even overtaking a gunman comes to San Diego City College on Jan. 15.

“This will be a realistic exercise utilizing flash-bang and other devices that will incorporate training for both emergency response teams and faculty and staff,” said Lt. Gilbert Torres of the San Diego Community College District Police Department.

Separate four-hour training sessions are set to begin at 8 a.m. and 1 p.m. in Room 140 of the MS Building at 15th and C streets. Each class will be separated into two simultaneous components.

In the first component, police officers will review and hone their skills at responding to an active shooter situation, including clearing rooms and stairwells and securing buildings. At the same time, a group of faculty and staff, along with some officers, will take part in an ALICE academy. ALICE is an acronym for Alert, Lockdown, Inform, Counter, Evacuate, and those words describe what potential victims are taught to do if they find themselves in a building that has been targeted by a gunman. The ALICE program represents a change in thinking about how potential victims should respond to an active shooter, teaching individuals to participate in their own survival while leading others to safety.

The Alert step means letting people know about the situation. In the Lockdown step, students are instructed to use desks, tables, and chairs in making an effective barricade that can keep an intruder from storming through a classroom door. Inform means using technology to provide play-by-play information to authorities. The Counter step trains students to make noise, create movement, and distract the assailant, actions that would reduce the shooter’s ability to open fire accurately. And Evacuate means getting away from danger if possible.

What makes the January 15 exercise somewhat unique is that it brings together two different training exercises. In the latter part of each four-hour session, police responding to an active shooting situation will interact with those who are taking part in the ALICE academy.

“It will offer a realistic scenario to demonstrate how the two entities will interact during an active killing scenario, and it will identify communication and logistical issues police officers and citizens might encounter,” Lt. Torres said.