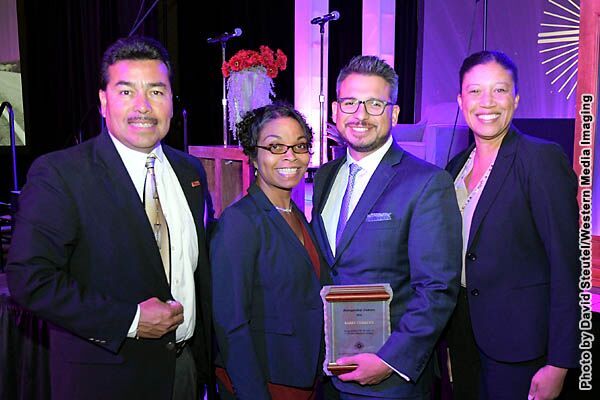 When Barry Cordero returned to school at San Diego City College (SDCC) after six years in the Navy, he wasn’t certain how to get where he wanted to go.  Now, a dozen years later, he attributes his career and life success to the experiences he had at City College — and he’s delighted to be named a Distinguished Alumnus for 2016 by the Community College League of California.

“It’s an honor to be recognized by the California Community College system,” Cordero said. “This recognition is humbling when I consider the hundreds of thousands of people who have been the recipient of the value of a community college education. I feel the weight of responsibility to ensure I maintain a positive image and represent the state well.”

Cordero said City College provided him a safe learning environment and the opportunity to build the skills and habits he needed to pursue his bioengineering degree at UC San Diego.

Now with a clear focus on his future, Barry began using his engineering skills to improve medical devices in a range of therapies including spinal implants, cardiac devices, neurostimulators and more recently glucose monitors and insulin pumps.  The majority of his career has been with Medtronic, where he is a Lean Sigma Master Black Belt and now leads the continuous improvement strategy for Medtronic Diabetes as the director of Global Operations Excellence.

Cordero also noted that SDCC and its’ MESA program, which supports students in math, engineering and science majors, introduced him to the Society of Hispanic Professional Engineers (SHPE).  Barry shared, “SHPE was my first experience in community work and it changed my whole career and life afterward.”

Following SHPE’s mission, Barry  continues to dedicate his life to empowering youth in the Hispanic community to realize their full potential and to impact the world through STEM (Science, Technology, Engineering and Mathematics).

Barry advanced through the ranks of the SHPE national organization. He started as a regional student representative in 2006, then became the national vice president in 2011, the national president/interim CEO in 2013, and now has served as interim CEO since October.

Barry says that the concept of social impact means a lot of different things to different people. To him it means,”… making kids aware of a better life through an engineering degree. It means convincing a young engineer or scientist that they have to dream bigger and higher and showing their companies how to think differently about diversity in leadership. It also means supporting someone who, although they are not a citizen, wants nothing more than to give back to the country that allowed them to dream.”

“Barry’s accomplishments reflect our ultimate goal: to help students achieve their educational and professional goals and serve their communities,” said Denise Whisenhunt, SDCC interim president. “We’re proud he got his start here and join the Community College League of California in saluting him.”