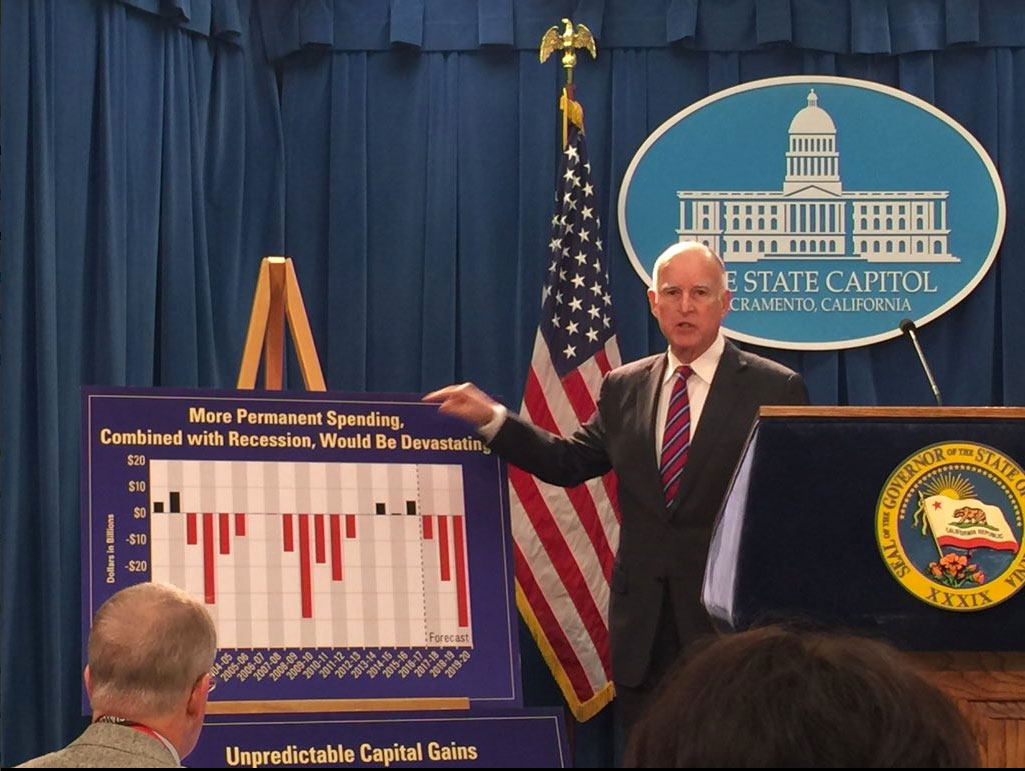 California weather patterns are variable at best, ranging from extreme drought to a condition called “El Niño,” named after the “Child Jesus,” since the Pacific Ocean near the South American coast is normally at its warmest during the Christmas season. El Niño is the warm phase of what is known as the El Niño Southern Oscillation in which warm ocean water and high air pressure in the western Pacific combine with low air pressure in the eastern Pacific.  In El Niño years, the Jet Stream conveys these conditions across the continental United States and beyond, causing dramatic, global changes in both temperatures and rainfall.

After a severe economic recession, California’s financial El Niño pattern was ushered in on November 6, 2012, when voters approved Proposition 30, legislation promoted by Governor Jerry Brown to raise revenue through the imposition of two temporary tax measures: a quarter-cent sales tax and a special tax on those earning upwards of $250,000 per year.  As a direct result, California has seen steady increases in revenue, allowing for many funding improvements.  Our economic El Niño effect is continuing in the new budget, although at a more modest level of increase than the increase in 2015-16.

This morning, Governor Jerry Brown gave his annual press conference to introduce his budget proposal for 2016-17, which officially starts the state’s budget development process.  The Governor’s Budget Proposal will be followed by legislative discussions, lots of advocacy from the public and private sectors, and further study by the State Department of Finance and the Legislative Analyst’s Office (LAO) as more is known about revenue being generated in the current year.  The next official step in the process will be the governor’s second budget proposal, known as the May Revision, which will be issued later in the spring, and will be based upon the updated revenue figures.

In today’s presentation, Governor Brown outlined a $122.6 billion General Fund spending plan for California that includes an $8 billion Rainy Day Fund, which now amounts to 65% of the Constitutional requirement for the state’s reserve.  The governor stated that “relative to years past, the budget is in good shape,” but was quick to point out that recessions recur, making it important to carefully balance ongoing and one-time budget increases with ongoing and one-time expenditures.  Noting that there have been 10 recessions since World War II, Governor Brown anticipates that another recession will affect California in the range of $56 billion at some point in the future.  He urged public and private sector leaders and organizations to take that into account in making their budget plans for the coming year.

For K-12 and higher education, Governor Brown presented increased funding proposals and a number of new directions. The Proposition 98 Guarantee for K-12 and Community Colleges is slated to increase to $71.6 billion in the coming year.  For the higher education sector, the governor’s proposed budget calls for a moratorium on tuition and fee increases for students; improving graduation rates in the California State University system; and increasing the number of community college transfer students to the University of California. For the state’s community colleges, plans include both developing and expanding programs in workforce and career-technical education; maintaining the current levels of many student grants and increasing some student grant support; making a greater investment in technology to reduce instructional and textbook costs; continuing the emphasis on student success and basic skills programs; providing increased funding for deferred/scheduled maintenance and instructional equipment; and a number of other measures designed to increase access and quality.  It is clear that, as State Chancellor Brice Harris stated, “Gov. Jerry Brown’s budget proposal for community colleges shows a continued commitment to public higher education in California.”

The San Diego Community College District (SDCCD) looks forward to taking the “balanced approach” that the governor has encouraged in developing the expenditure budget for 2016-17.  As in the past, our approach will combine increased investment in City, Mesa, and Miramar colleges, and the six campuses of Continuing Education with strong reserves and plans for future financial obligations, such as the steep increases in the employer contribution to the CalSTRS and CalPERS retirement systems.  The Board of Trustees and I, along with Executive Vice Chancellor Bonnie Dowd and our leadership team of administrators, faculty, staff, and collective-bargaining organizations, have always supported this type of balanced approach, which has kept our District in a posture of excellent financial management and financial security. The current funding level will continue, and the following are the key highlights of additional funding in the Governor’s Budget along with the estimated impact on the SDCCD.

SDCCD Impact: This will yield $1.1 million, which will be distributed in accordance with our Resource Allocation Formula (RAF).  We will be advocating for a larger COLA.

$114.7 million is provided for a 2% enrollment increase based upon the measure of Full-Time-Equivalent Students (FTES).

SDCCD Impact: The SDCCD will receive  $3.6 million, which will be distributed in accordance with the RAF. As in the past, our District and some other growing, urban districts would prefer to see a higher growth funding capability, while other districts in the state are declining in enrollment and may want to see a lower level of growth funding. This will be one of the issues that we will pursue during the advocacy period between today and the May Revision.

This year’s state allocation will be $289 million.

SDCCD Impact: This will yield $9 million for the SDCCD budget; it is our practice to split these funds 60% Facilities ($5.4 million) and 40% Instructional Equipment ($3.6 million).

The Governor’s Budget includes funding in the amount of $76.3 million for outstanding legal mandates that will be distributed on an FTES basis.

A fund will be included that will award $28 per FTES to districts in lieu of their submitting specific, current-year claims.

SDCCD Impact: This will yield $1.2 million to the SDCCD.

There are other programmatic funds in the Governor’s Budget, which will be held in the State Chancellor’s Office and for which local community colleges and districts may either compete (e.g., a special $25 million fund for innovation and $248 million in funds for workforce education and Career-Technical Education Career Pathways) or receive through another distribution method still to be determined (e.g., the COLA for personnel in categorical programs).

As I said earlier today in response to an inquiry from the news media, the Governor’s Budget proposal brings more good news for community colleges, providing funding for enrollment growth, workforce education, technology, and building maintenance, without raising student fees.  Under the governor’s budget, the San Diego Community College District will receive an additional $18.7 million, enabling our colleges to offer more classes to serve 1,200 more students than last year and to invest in more programs leading to jobs. I am delighted to see this continuation of our positive direction for the future.

The Board of Trustees and I look forward to a positive and constructive budget development process in our District, and we will provide more information as it becomes available.  We also look forward to the advocacy efforts that will begin later this month when our leadership team will join our counterparts in the San Diego and Imperial Counties Community Colleges Association for meetings with legislators in Sacramento.