San Diego City College is proud to announce that one of its students — Issanna Loughman — has been named to the 2016 All-USA Community College Academic Team. She is one of just 20 students from more than 1,900 nominations selected for the prestigious honor, and she was also named a 2016 Coca-Cola New Century Scholar for receiving the highest application score in California. 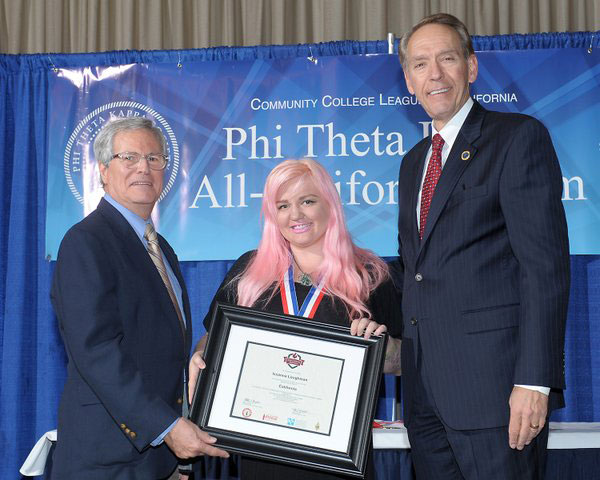 Loughman received a $5,000 scholarship and special medallion for making the All-USA Team. She also received a $2,000 scholarship as a New Century Scholar. The All-USA honors were presented to Issanna and City College President Anthony Beebe at the Presidents Breakfast this morning during the American Association of Community Colleges (AACC) Convention in Chicago. She and the other 19 team members are also featured in a special edition wrap that accompanied today’s USA TODAY.

“We’re so proud of Issanna, as she personifies the academic excellence our students work to achieve,” Beebe said. “Her accomplishment speaks volumes about the quality of our faculty and the academic programs at San Diego City College.”

Loughman, a psychology major, is on the dean’s list and has been inducted into two national honor societies: Psi Beta and Phi Theta Kappa (PTK). A dedicated community volunteer, she has created multiple outreach programs including the Hart Healing Art Project for therapeutic art activities, the Vida Joven Preschool Program to help orphaned preschoolers in Mexico, and a college Psychology and AODS Tutoring Program. She plans to earn a B.A. in developmental psychology and a doctorate in clinical psychology so she can offer therapy to children with mental illness and conduct research to support positive policy change concerning the treatment of children in residential psychiatric care.

In reflecting on her recent honors, Issanna shared, “I never thought I was smart enough to be an honors student or transfer to a 4-year college, but by being at San Diego City College I have been able to do things I never thought possible. I am so grateful to have earned a place on the All-USA academic team and represent City College, because in my opinion there is no better place to go to school than here.”

More about Issanna
Issanna began her studies at City College in fall 2013. Her first year, she used a walker on most days to get to her classes as she had recently been diagnosed with a degenerative disc disease. Some days, she couldn’t lift her head off the pillow; she couldn’t walk for an entire year and had spine surgery.

“That first year I was in and out of the hospital because of complications from my spine surgery. The pain was so intense, but being in school gave me something to dedicate my time to,” Issanna said. “Even if I was in the hospital, I would do my assignments. I never fell behind, and having things to keep me mentally stimulated was so important.”

Issanna credits her experiences at City College with opening her eyes to what was possible for her. “I was able to realize my potential because of the faculty and students, especially the psychology faculty,” she said. “I have done all I can to give back to City College.”

Issanna’s latest awards are additions to many other honors. In spring 2015, she received the Ann G. Robinson College Life Award from the National Psi Beta Council, a San Diego Gas & Electric Leadership Award, and a State Senate Certificate of Recognition, among other awards. She has also received two Friends of Downtown scholarships, the Encore Capital Scholarship and the Raymond R. Farmer Memorial Scholarship.

Issanna has gained experience in the area of research, including currently serving as a research assistant at UC San Diego. She also participated in a research study, Behind the Glitter, which she is presenting at this year’s Western Psychological Association convention. She is working on her research thesis, Lock It: Children in American Psychiatric Institutions, and also serves as an intern for Dr. Dan Stacy at Circles 4 Change, who runs a restorative practice and provides trauma-informed care to San Diego County youths.

Issanna has very specific plans for her future and is well on her way to achieving her goals. She has already been accepted at Cal Poly in San Luis Obispo and she is awaiting a response from NYU.

The All-USA Community College Academic Team is sponsored by Follett Higher Education Group and presented by USA Today with additional support provided by the AACC and PTK.