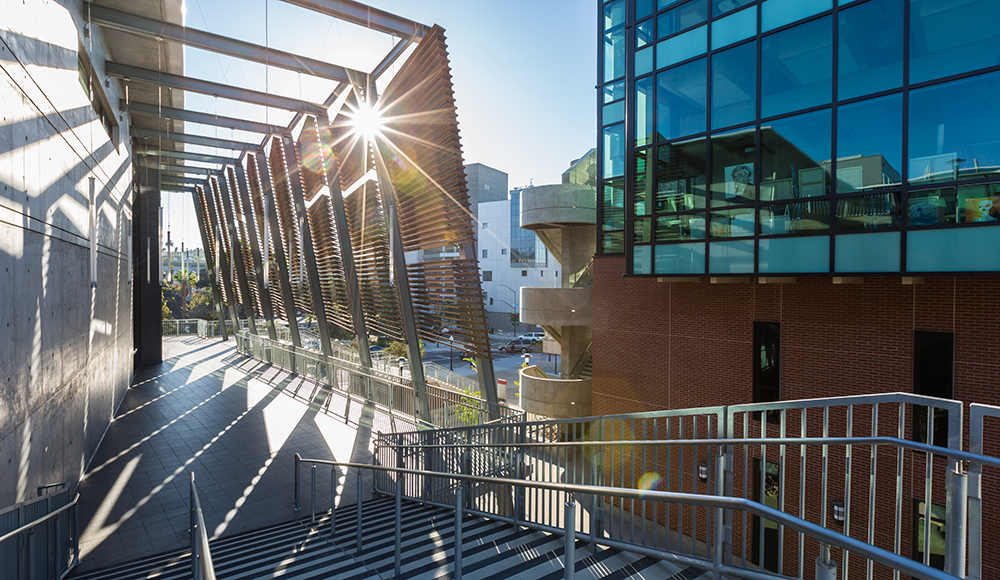 Sunrise at the Technology Building at San Diego City College.

Construction projects in the home stretch

The San Diego Community College District is celebrating an extraordinary achievement. After passing two major bond measures since 2002, 42 new buildings have been constructed along with several major infrastructure projects. The District’s bond program is now in the home stretch and it’s fair to say that the District’s campuses have been transformed. 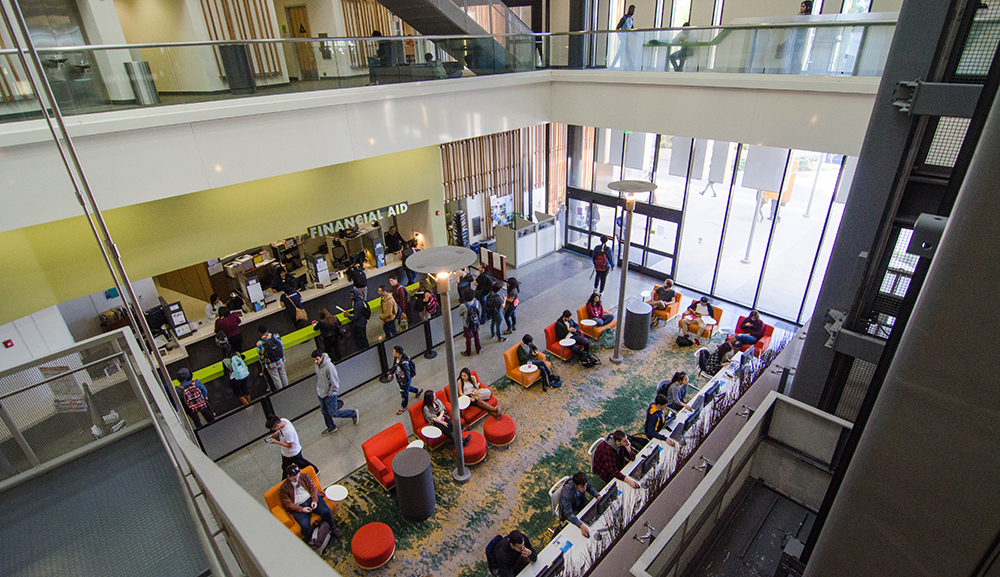 Students in the Student Services Center at Mesa College.

“This is a billion-and-a-half-dollar project pulled off by the San Diego Community College District that has successfully transformed all three of its colleges, plus Continuing Education, and has expanded educational opportunities for students and our community, and it has done so in a fiscally responsible manner that has served the taxpayers well,” said Sparrow, who chairs the District’s Citizens’ Oversight Committee and is a professor emeritus at San Diego State University’s School of Public Affairs and Urban Studies. “This is, quite frankly, one of the better bond projects that I’ve been involved with.”

Now the District is in the homestretch. No additional projects are planned for San Diego Continuing Education, and construction is all but complete at Miramar College, save for some relatively minor infrastructure work. Crews remain busy at City College where $58 million in renovations are taking place, but the lion’s share of construction there has concluded, too. Over at Mesa College, remaining construction includes the new Center for Business and Technology. The $32 million project will serve as the new home for Mesa’s business, computer, and fashion design programs. A ceremonial groundbreaking for the new site was held in June.

“When I visit the District’s campuses, I am continually astonished by the new buildings and landscaping that have dramatically reconfigured the three colleges and Continuing Education,” Chancellor Constance M. Carroll said. “Campus facilities now match the excellence of the faculty who teach and the staff who provide support services for students.”

What have taxpayers received for their investment? 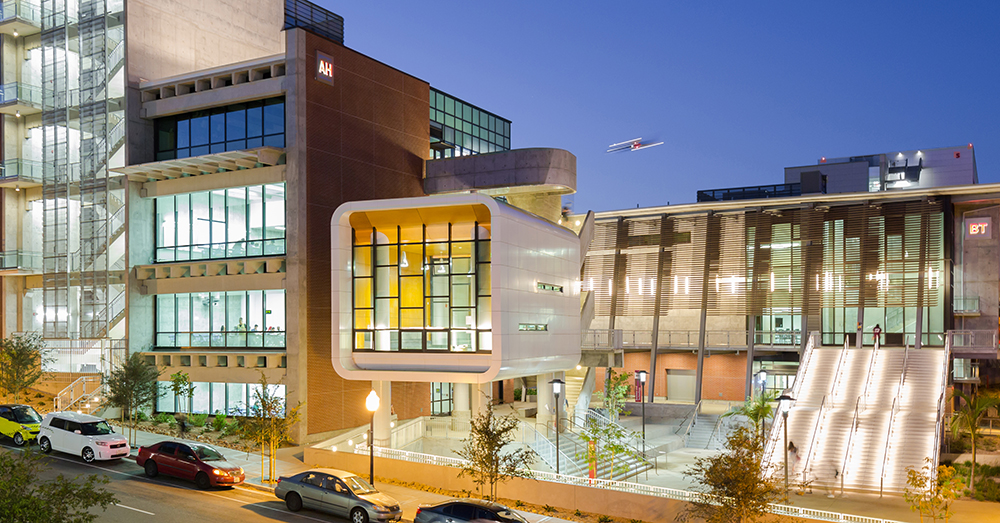 The Arts and Humanities building at City College.

• At City College, completed new projects include the $94.6 million Arts & Humanities and Business & Technology buildings, a $63.3 million Career Technology Center, and a $57.4 million Science Building, in addition to numerous extensive renovations that have remade the look of the campus.

• At Mesa College, completed projects include a 45,000 square-foot Humanities, Languages & Multicultural Studies Building that brought multiple humanities-related programs together in a single structure, a $109.3 million Math+Science Complex, a 73,000-square-foot Mesa Commons that serves as a student hub and gateway to the campus, a $44.9 million Student Services Center, a $40.5 million Social and Behavioral Science Building, a $29.9 million Allied Health Building, and a $14.3 million Exercise Science Center. 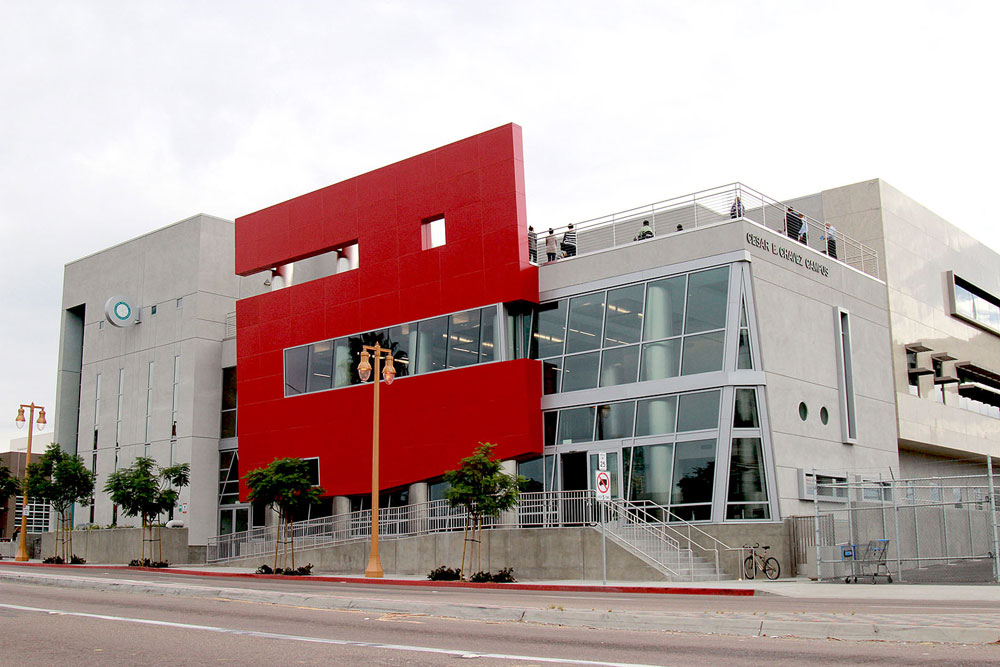 • At Continuing Education, bond-funded projects include the construction of six new campus facilities and a major wing extension for the Educational Cultural Complex. The new César E. Chávez Campus in Barrio Logan, complete with an underground, 149 car parking area and detached car park with 320 additional spaces and murals featuring the life and work of César E. Chávez located two blocks east of the campus, has helped transform the community. Among the other new Continuing Education facilities are a new campus at Mesa College, a new Mid-City Campus in the heart of City Heights, a new North City Campus, and a new West City Campus near the San Diego Sports Arena.

Every new and remodeled building funded through Propositions S and N has received Leadership in Energy and Environmental Design, or LEED, certification.

Among the other highlights:
• Of the more than 1,100 individual construction contracts awarded through December 31, 2016, more than 56 percent were awarded to businesses certified as historically underutilized, including those headed by women, disabled veterans, and/or minorities.

• Even though construction has doubled the square footage at City, Mesa, and Miramar colleges, and Continuing Education, energy and water costs have decreased. The District requires all projects to divert at least 75 percent of construction and demolition debris from landfills, yet the amount has been significantly higher in most cases and up to 92 percent in some.

• Last fall, an improved financial forecast coupled with higher ratings assigned to bonds sold through Propositions S and N resulted in a savings of $80 million to taxpayers. In addition, Moody’s Investors Service upgraded the District’s bond rating from Aa1 to Aaa, its highest possible rating, marking the third time Moody’s has upgraded the District’s bond rating since 2005.

So what’s left to do?
At City College, the most significant remaining project is happening at the Engineering Technology building, where approximately 77,000 square feet of space is being remade to accommodate new homes for the Engineering Department, along with space for the Agriculture Program, the Center for Applied Competitive Technologies incubators, and more. Meanwhile, plans for a new $7.1-million Child Development Center are in the design phase. 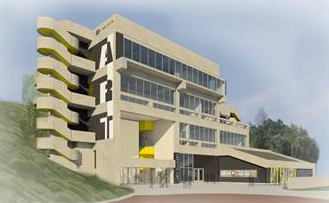 A sketch of the future Fine Arts building at Mesa College.

Once the Center for Business & Technology is complete at Mesa College, the only significant project left will be a major renovation of the Dramatic & Fine Arts Building, now in the design phase. The four-story, $14.8-million project will include 26,500 square feet of space within the former I-300 Building, with the main entrance housing the Mesa College Art Gallery.