Until Erwin Trejo turned 18, he spent four years in and out of juvenile hall and drug rehabilitation. He served time for robbery and violent crime. 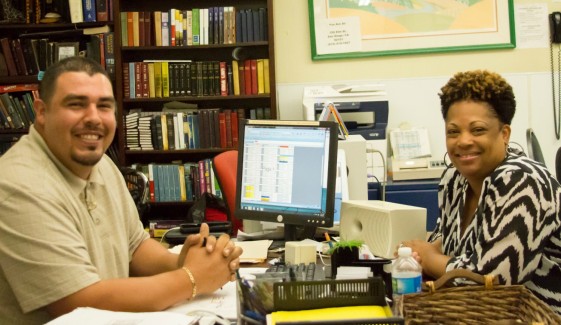 “My family used to look for me on the streets. They would tell me to come home. Sometimes I got in the car but most of the time I would walk away.”

Erwin explains he was raised in a loving home in San Diego. “My parents supported me so much. I grew up having everything, toys, video games, bicycles and all of that.”

Despite the support of his family and losing his older brother to substance abuse, Erwin got involved in the streets at age 14 and joined a gang six months later.

“I always got Bs in school. I liked to learn, I was good with numbers and history.” Erwin excelled in high school but dropped out as a sophomore.

“I continued my education in juvenile hall, but it meant nothing to me. I was focused on jokes and scratching the table with gang letters.”

After tirelessly going back and forth between jail and treatment he arrived at the San Diego Rescue Mission (SDRM). The charity located on the corner of Elm St. in Downtown, San Diego that provides emergency shelter, hot meals, transitional housing, recovery counseling and adult education.

“Right when I got there I said this is it. This is where I'm going to get my life together, do the right thing and get my GED.”

San Diego Continuing Education and the SDRM launched a partnership last year to provide SDRM clients with free basic skills courses and career training. The offerings include classes to earn a High School diploma or equivalency, which are the classes that changed Erwin’s path.

“When I started the class, I was a little bit rusty but then it felt good again.”

The SDRM has tried to offer higher education as part of their services since its beginning, over 60 years ago, but lacked the resources.

“Since I arrived at SDCE more than two years ago, it has been a priority to expand education to adults in San Diego who are vulnerable and who need additional supports for educational success,” said Carlos O. Turner Cortez, Ph.D., President of SDCE. “Courses offered at the Rescue Mission were selected to meet the immediate needs of the population at the Mission. ”

SDCE is the adult education division of the San Diego Community College District (SDCCD) and serves 44,000 adult students annually at seven campuses in San Diego, plus at more than 200 off-campus locations, including SDRM.

“The partnership with SDCE is amazing because you're talking about individuals who never thought they could take advantage of higher education and we’re making it accessible to them here at the Rescue Mission.” said Angela Ford, Aftercare Coordinator for SDRM.

Erwin stayed true to his self-determination and received good news earlier this year. “Miss. Angela told me I was the first person to get a GED while at the San Diego Rescue Mission. I felt great. It's something I thought was impossible and it has happened.”

Now 27, Erwin describes his graduation ceremony at SDRM, “My mom was really happy. She felt like she won the lottery that day.”

Following the ceremony, Erwin was chosen for an internship at SDRM, and will work with people who are newly admitted into the shelter.

“I want to pay it forward. I would tell my 15 year-old self that it's not worth it. Continue your education, go to a community college or a university. You deserve so much more for your life."

Erwin will transition to San Diego Mesa College next year to become a drug and alcohol counselor.

In spring 2018, SDCE will expand programming at SDRM by starting to place students in career education programs at SDCE campuses. Plus career and college readiness courses will be added to the current lineup of classes that already includes free career training in a Business Information Worker program and Parent Education.

SDCE awarded 9,522 certificates of completion and high school diplomas in 2017, which is more than any other noncredit adult educational institution in the state of California.