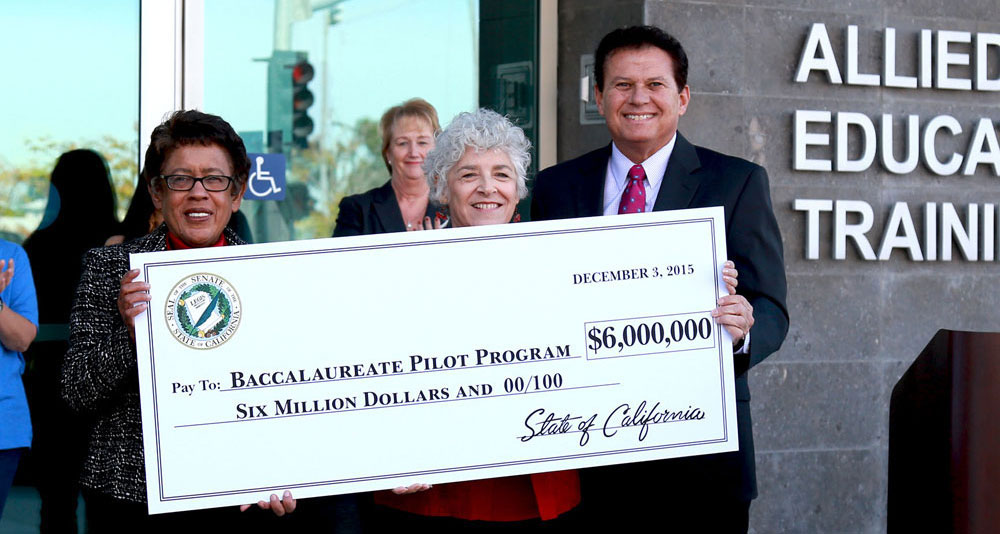 From left, San Diego Community College Chancellor Constance M. Carroll, SDCCD Board of Trustees President Maria Nieto Senor and State Sen. Marty Block hold up a check representing the $6 million that has been secured for the baccalaureate pilot program.

State Sen. Marty Block (D-39) announced Thursday, Dec. 3 that $6 million has been secured to assist with the start-up costs for California’s historic Baccalaureate Pilot Program. The funding will support the establishment of one new bachelor’s degree program at 15 California community colleges.

Block made the announcement at San Diego Mesa College, which launched its four-year program in Health Information Management in August. Block presented a check for $350,000 to San Diego Mesa College President Pamela T. Luster, which is the amount each of the 15 pilot colleges will receive to assist with hiring faculty, program development, and other costs. The balance of the $6 million will support the California Community Colleges Chancellor’s Office with overall management of the program.

“My bill creating the pilot allowing community colleges to offer four-year degrees will be a game changer for California students and the state’s workforce,” Block said. “Securing support for the pilot will help ensure its success and that we can meet an expected need of 1 million more adults with baccalaureate degrees by 2030.” 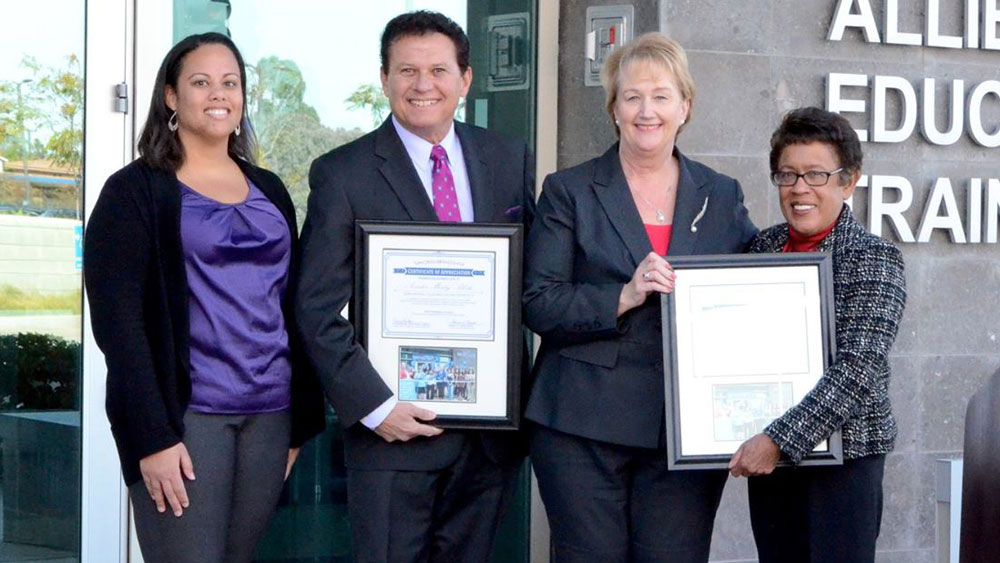 Block authored Senate Bill 850 in 2014, establishing California’s community college baccalaureate pilot program. Since then, he has worked as a member of the Senate Budget Committee to secure start-up funding. Participating colleges will offer bachelor’s degree programs in career-technical fields such as dental hygiene, automotive technology, biomanufacturing and airframe manufacturing technology. None of these programs are offered at the California State University or University of California.

With the launch of its community college baccalaureate pilot program, California joins 22 other states which allow their community colleges to grant four-year degrees. San Diego Community College District Chancellor Constance M. Carroll, who led the statewide coalition that helped secure approval of SB 850, says this is a positive trend that has been proven to benefit each state’s economy.

“One of the top priorities of community colleges is preparing students for well-paying jobs in the twenty-first century. With many industries now requiring bachelor’s degree preparation in fields in which no programs exist at public universities, community colleges across the nation have stepped up to provide the training that students need to be competitive. I am very pleased that our district and Mesa College are leaders in this new California effort. This is indeed an accessible doorway to an improved local and state economy, as well as an entry to the middle class.”

For example, starting salaries for San Diego Mesa College’s first cohort of 32 Health Information Management graduates are expected to range from $83,000 to $144,000.  Employers, including local healthcare providers and hospitals, say there is strong demand for these graduates.

Block says affordability was another important consideration.  Students participating in the baccalaureate pilot program will pay approximately $10,560 in fees and tuition for their four-year degree, a fraction of the cost of private universities. On average, California State University in-state students will pay $27,036 for four years of study.

"The California Community Colleges Board of Governors selected the bachelor’s degree programs at these pilot colleges based in part on demonstrated labor market demand for workers in these applied fields,” said California Community Colleges Chancellor Brice W. Harris. “The funding that has been secured to help stand up these bachelor degree programs will go a long way in ensuring that students benefit from high quality offerings that lead to good paying jobs.”