Today the Institute for Civil Civic Engagement (a partnership between the San Diego Community College District’s Mesa, City and Miramar Colleges and the University of San Diego) joined the National Institute for Civil Discourse in calling on the presidential debate moderators to adopt a set of Debate Standards designed to ensure that the 2016 Presidential Debates are fair, informative, and civil. More than 60 organizations signed on to the debate standards, which include guidelines for moderators, the audience, and the candidates themselves. 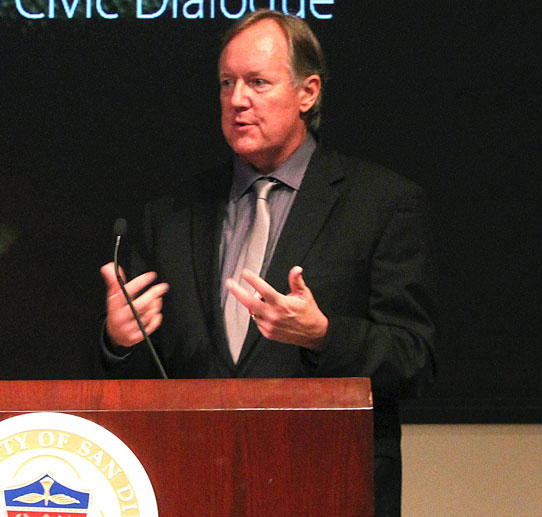 This election is the most uncivil in recent memory, and Americans agree. According to recent polling, 69 percent of Americans agree that civility has decreased in the last few years, and 2 out of 3 voters say the 2016 campaign is less civil than other elections.

“Unlike Captain America, today America is engaged in a most ‘Un-Civil Civil War,” said Dr. Carl Luna, ICCE Director. “We need our candidates in these debates to remember that they are setting the bar for civility not only for voters but for the children of this country as well.”

“After the constant vitriol and caustic rhetoric this campaign has wreaked on America’s political landscape, the debates represent our last best chance for a civil reset, for Americans to come together and hearing the candidates’ cases,” said Dr. Carolyn J. Lukensmeyer, Executive Director of the National Institute for Civil Discourse. “We urge the moderators to adopt the National Institute for Civil Discourse’s Debate Standard and therefore ensure a civil debate, where both sides are heard and respected and treated equally.”

The Debate Standards are:

1. Be respectful of others in speech and behavior

2. Answer the question being asked by the moderator

3. Make ideas and feelings known without disrespecting others

4. Take responsibility for past and present behavior, speech and actions

5. Stand against incivility when faced with it

1. Address uncivil behavior by naming it and moderating the conversation to move toward a more respectful dialogue

3. Hold candidates accountable by challenging each candidate to speak the truth and act with integrity

4. Treat all candidates equally in regards to the complexity of questions and debate rules

5. Be respectful when interacting with candidates

1. Be respectful of other audience members, the candidates and moderators in speech and behavior

2. Refrain from creating disturbances to other audience members, candidates and moderators

4. Speak against incivility by reminding candidates it is not acceptable

5. Practice active listening when someone else is speaking, seeking to understand them

The Institute for Civil Civic Engagement  is a partnership between the San Diego Community College District’s Mesa,  City and Miramar Colleges and the University of San Diego. The mission of the Institute for Civil Civic Engagement is.  to encourage, promote and increase civility in civic discourse by our fellow citizens and public officials, both interpersonally and in all manner of media. We seek to promote ways to be civil in our disagreements and respectful in our debates, as we confront the political challenges that shape our community. ICCE fosters community initiatives, develops educational resources, and provides models of effective civil civic engagement for implementation and replication across the San Diego community and beyond.

The National Institute for Civil Discourse, is a nonprofit, non-partisan institute based at the University of Arizona dedicated to addressing incivility and political dysfunction in American democracy by promoting structural and behavioral change. Informed by research, NICD’s programs are designed to create opportunities for elected officials, the media, and the public to engage different voices respectfully and take responsibility for the quality of our public discourse and effectiveness of our democratic institutions. NICD was formed after the tragic shooting of former Rep. Gabby Giffords in Tucson, and their National Advisory Board includes former President George H.W. Bush, former Supreme Court Justice Sandra Day O’Connor.