Districtwide effort aims to double the number of graduates in seven years.

The San Diego Community College District (SDCCD) has launched a new campaign aimed at boosting the number of students earning an associate degree. Titled, Earn More Than A Degree, the campaign highlights the importance of securing an associate of art or an associate of science degree even for those happy with just securing enough units needed to transfer to a four-year university.

“Too often students transfer to universities without obtaining an associate degree,” said SDCCD Chancellor Constance M. Carroll. “If they need to interrupt their baccalaureate studies, they have nothing to show for their work, making them less competitive than students who can prove they have completed a program of studies.” 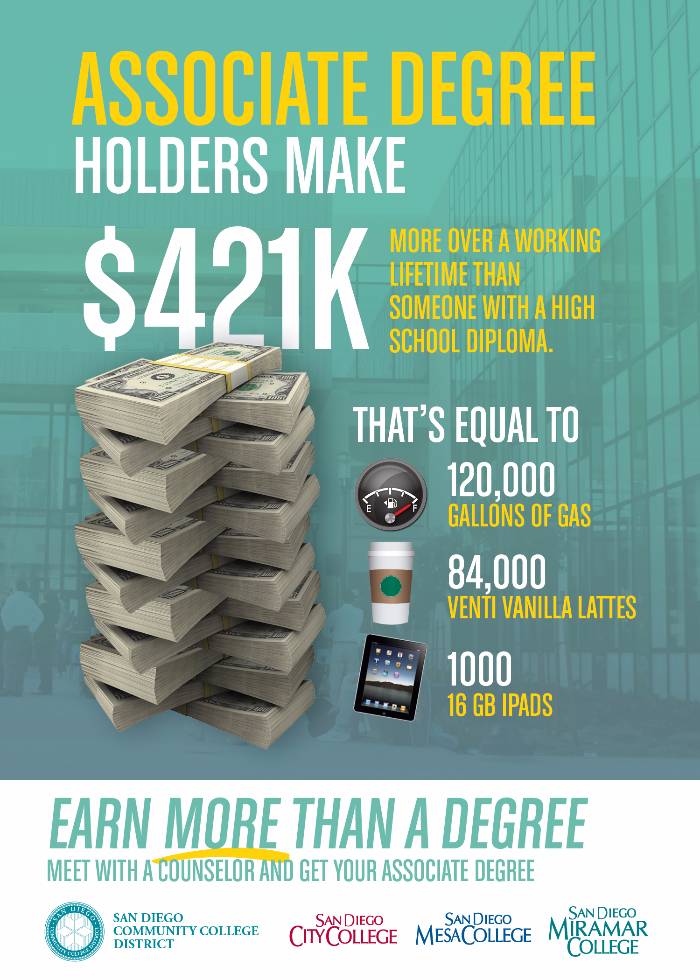 The Earn More Than A Degree campaign is part of a larger, districtwide effort to double the number of students who earn a degree or certificate over the next seven years. It includes posters, banners, a webpage, student newspaper ads, and the use of social media to emphasize the educational and economic advantages of earning an associate degree. All three of the district’s colleges, including San Diego City College, San Diego Mesa College, and San Diego Miramar College, are participating.

The campaign points out that:

- Associate degree holders earn $421,000 more over a working lifetime than someone with a high school diploma.

- Nearly 45 percent of students who graduated with an associate degree – even those who did not transfer to a university – earned more than $54,000 annually after five years of securing their diploma.

Olivia Light, president of the San Diego Miramar College Associated Student Council, plans to earn her associate degree in 2016 before transferring to a University of California campus to study international development.