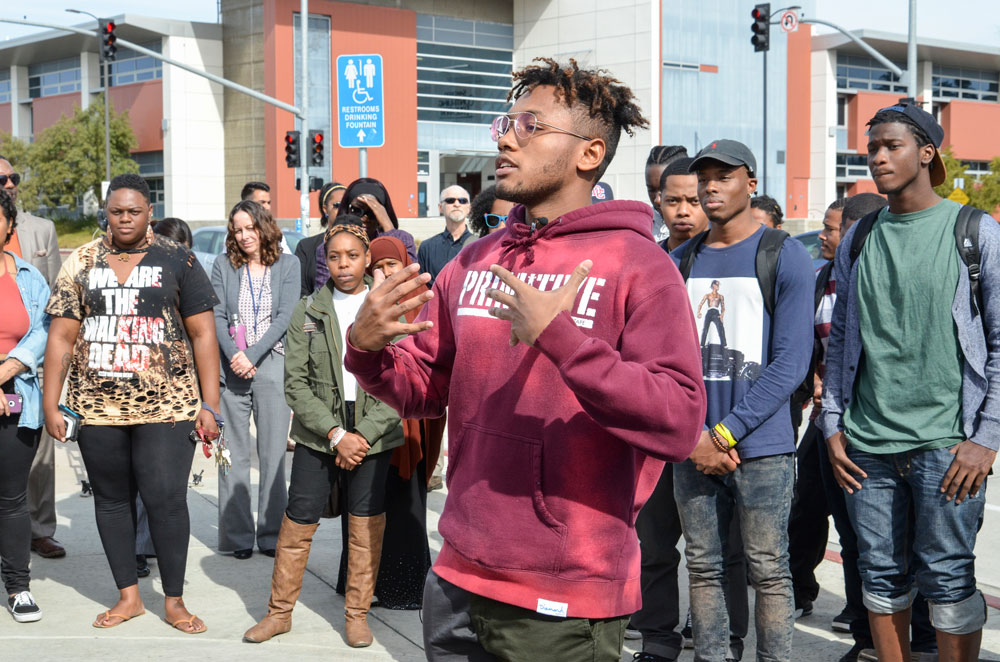 A student speaks during the Rosa Parks celebration at Mesa College in 2017.

From a celebration of jazz at San Diego City College to a screening of the Academy Award-winning film "Selma" at San Diego Miramar College, the San Diego Community College District will be celebrating Black History Month with an array of activities and exhibits throughout February.

All events are free and open to the public unless otherwise noted.

11 a.m. to 2 p.m.
STEAM Discussion: Mastering Math in My Mirror
A discussion with Dartanyon Shivers, who earned an associate degree at Mesa College and a bachelor of science degree in applied mathematics at UCSD and who is now an instructor at Mathnasium math tutoring center in San Diego.
San Diego Mesa College, Mesa Commons, 211 A/B, 7250 Mesa College Drive, 92111.

10:30 a.m. to 2 p.m.
Umoja: Woman to Woman Conference
The Woman to Woman conference aspires to build leaders, create unity and celebrate innovation. The theme of this event is Protect Your Crown, meaning protecting what is important to you, finding the courage to stand firm and walk boldly into everything.
San Diego Mesa College, Mesa Commons, 211 A/B, 7250 Mesa College Drive, 92111.

7 to 10 p.m.
Let the Poets Speak
Join Mesa College Professor Judy Sundayo and Alyce Smith Cooper (Poet Laureate of the Veterans Museum) in articulating what healing looks like for the black community. An open mic event begins at 8 p.m., but you must sign up on the list no later than 7:15. Tickets are $17 for professionals, $15 for others, and $12 for students, with proceeds supporting the Association of Black Psychologists San Diego Chapter and its work in the black community.
Balboa Park Veterans Museum, 2115 Park Blvd., 92101.

12:45 to 6:30 p.m.
By(e) Default (opening reception and discussion)
Through the works of five contemporary artists and three poets, this exhibit challenges racial codings and engages in both the revision and celebration of black history. Featuring the works of Elizabeth Axtman, Suzanne Broughel, Cortney Charleston, Lissa Corona, JC Lenochan, Jason Patterson, Claudia Rankine, and Nicole Sealey. A reception will be held from 3 to 6:30 p.m. at the San Diego Mesa College Art Gallery, D-101. An Artist Panel will be held from 12:45 to 2 p.m. in Humanities and Multicultural Studies Building, G-102. The exhibit opens Feb. 5 and will continue through Feb. 28.

6 to 9 p.m.
“I Am Not Your Negro”
Join us for this screening of the Oscar-nominated documentary based on James Baldwin’s unfinished manuscript that draws upon the lives and assassinations of Medgar Evers, Malcolm X, and Dr. Martin Luther King Jr. to explore and bring a fresh and radical perspective to the current racial narrative in America.
San Diego Mesa College, Mesa Commons, 211 A/B, 7250 Mesa College Drive, 92111.

12:45 to 2 p.m.
"Hidden Colors 3: The Rules of Racism"
The Rules of Racism is the third installment of the critically acclaimed documentary series Hidden Colors 1 and 2. This installment explores how institutional racism affects rules, laws, and public policies that are utilized to maintain this system. The film features commentary from a diverse group of scholars, authors, and entertainment icons.
San Diego Mesa College, Mesa Commons, 211 A/B, 7250 Mesa College Drive, 92111.

1 to 5 p.m.
Middle Passage Experience
Students and faculty will take part in an engaged discussion and breakout sessions on slavery and black history, with a focus on the Middle Passage crossing from Africa to the Americas aboard ships with unspeakable conditions.
San Diego City College, MS-140, Corporate Education Building, 1551 C St., 92101.

9 a.m. to 1:30 p.m.
Umoja Black History Month Celebration
This event, which begins with a continental breakfast, will include a keynote speaker on black history and breakout sessions about the African-American experience. High school students from around the county will be attending.
San Diego City College, MS-162, 1313 Park Blvd., 92101.

Noon to 2 p.m.
MLK Float Unveiling and I Have a Dream Wall Reception
The Office of Student Affairs will unveil a statue of Dr. Martin Luther King, Jr. previously used in City College’s entry for the MLK Parade, and present an ‘I Have a Dream Wall.’ King’s ‘I Have a Dream’ speech will be played and student leaders will engage participants in a discussion of King’s contributions and launch a call to action to continue King’s legacy to realize and build on his advocacy efforts for all people.
San Diego City College, Office of Student Affairs Lobby, Room M-200, 1313 Park Blvd., 92101.

7 to 8 p.m.
"Savage Acts: Wars, Fairs & Empire, 1898-1904"
This documentary details America’s oversees expansion and how world fairs at the time, with grandiose buildings and displays of ‘exotic’ people from around the globe, promoted these interests, as well as notions of Anglo-Saxon superiority. A discussion following the film screening will center on the intersection of the African-American and Filipino-American experience, as America dispatched Buffalo Soldiers to participate in the conflict.
San Diego Miramar College, Room H-104, 10440 Black Mountain Road, 92126.