The California Budget 2017-18
A Tale of Two Fishes

California is a state of complexity, dominated by paradoxes, polarities, and bifurcated structures, which lead to legislation and budgets that reflect the same characteristics. Take, for example, the issue of fish. California has not one, but two official state fish. Long enjoying a solitary spotlight was the golden trout, a freshwater fish, native to California, which also has the honor of being the state’s official piscifaunal emblem. Scientifically, the golden trout is known as oncorhynchus mykiss aguabonita. Achieving this honor required an act by the California legislature, based upon Assembly Concurrent Resolution No. 52, Chapter 90. Decades later, the California Department of Fish and Game recommended that a native marine fish, the garibaldi, be added to this pedestal. The legislature enthusiastically approved this addition in 1995, in response to Assembly Bill No. 77, which added Section 425.6 to the California Government code, specifying that “The garibaldi (hypsypops rubicundus) is the official state marine fish.” These designations prevent both fish from being, well, fished, and has kept them from becoming extinct. Attending to two separate patterns and two separate directions also distinguishes the California budget. 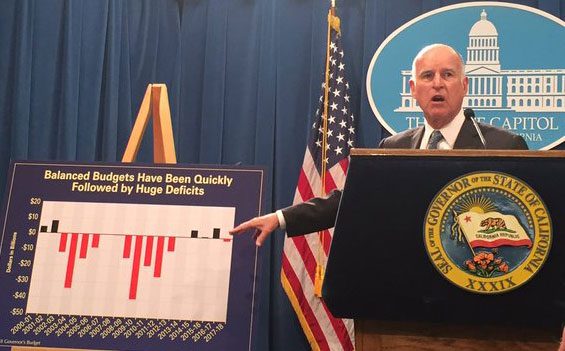 This morning, Governor Jerry Brown gave his annual press conference to introduce his budget proposal for 2017-18, which marks the official start of the state’s budget development process. The Governor’s Budget Proposal will be followed by legislative discussions, advocacy from the public and private sectors, and further analysis by the State Department of Finance and the Legislative Analyst’s Office as more is known about revenue being generated in the current year. The next official step in the process will be the governor’s second budget proposal, known as the May Revision, which will be issued later in the spring, and will be based upon updated revenue figures, as well as input from discussions and advocacy efforts.

This morning, Governor Brown outlined a $123 billion expenditure budget, including the important Rainy Day Fund. Emphasizing the need for “prudence,” the governor outlined the state’s fiscal dichotomy, noting that “The trajectory of revenue growth is declining, but is still growing.” He indicated that there have been 10 recessions since World War II and that another recession is inevitable in the not-too-distant future. The volatility of California’s fiscal situation is, he said, the great challenge we face as a state. “We are riding a volatile revenue system, what I call riding the tiger.” He then outlined his plan for a stable budget with some selected increases.

Budget Impact on Community Colleges & the San Diego Community College District
For community colleges, the expectation is also for stable funding along with some earmarked increases. The Governor’s Budget provides for two new vice chancellor positions in the State Chancellor’s Office, and special grant funding for the “Guided Pathways” project, innovation awards, and special technological support programs of a systemwide nature. The San Diego Community College District (SDCCD) is due for both the continuation of critical funding, especially for the Student Success and Student Equity programs, Continuing/Adult Education Block Grant, and workforce education initiatives that were the result of recent budgetary increases. During the year, we will apply for the competitive grants that will be available at the state level.

The SDCCD has historically followed the “balanced” approach called for by the governor, with an eye both to necessary increases and to protection against sudden downturns in state revenue. As in the past, our approach will combine increased investment in City, Mesa, and Miramar colleges, and the seven campuses of Continuing Education with strong reserves, especially the new dedicated reserve to address the steep increases in the employer contribution to the CalSTRS and CalPERS retirement systems. The Board of Trustees and I, along with Executive Vice Chancellor Bonnie Dowd, the College and CE Presidents, and our overall leadership team of administrators, faculty, staff, and the collective-bargaining organizations have always supported this type of balanced approach, which has kept our District in an excellent financial position, with security. The current funding level will continue, along with some new funding in the following areas.

Apportionments
- Cost of Living Adjustment (COLA). The Governor’s Budget includes a 1.48% COLA in the amount of $94.1 million. The SDCCD will receive $3.3 million that will be distributed in accordance with the Resource Allocation Formula (RAF). This is continuous funding. In our advocacy efforts, we will be seeking a higher COLA. $5.4 million has also been allotted to cover the COLA for categorical programs, e.g., Apprenticeship, EOPS, DSPS, CalWORKs, and the Child Care Tax Bailout programs.

- Growth in Access. The governor has proposed 1.34% in growth funding in the amount of $79.3 million. The SDCCD will receive $2.8 million. This funding is also continuous, and, since the SDCCD continues to grow, we will seek an increased level of funding for growth.

- Base Allocation. Recognizing the impact of inflation on community college budgets, as well as increased operating costs, the Governor’s Budget includes an increase in continuous base operating dollars, especially intended for the increased retirement system costs, of $23.6 million. The SDCCD impact will be $826,000.

- Facilities and Equipment. The governor has proposed one-time funding for the Physical Plant and Instructional Equipment in the amount of $43.7 million. The SDCCD impact will be $1.53 million, split 60% facilities and 40% instructional equipment.

Under the proposed Governor’s Budget, the San Diego Community College District stands to receive $6.92 million in continuous funding and $3.36 in one-time funds for a total of $10.28 million.

Our new State Chancellor Eloy Oakley has called the Governor’s Budget “good news for community college students.” The budget provides continuing support for programs designed to ensure student success and equity. It is also good news, in my view, for the overall support necessary to maintain our institutions in excellent condition, with healthy budgets and provisions for many unforeseen situations. The budget will also allow the SDCCD to support classes that our students need, with some increases in the number of class sections. It is, overall, a very responsible fiscal plan.

The Board of Trustees and I look forward to a positive and constructive budget development process in our District, and we will provide more information as it becomes available. We also look forward to the advocacy efforts that will begin later this month when our leadership team will join our counterparts in the San Diego and Imperial Counties Community Colleges Association for meetings with legislators in Sacramento.