From homeless to apprentice: A second chance at a successful future

Ozzie Lubach, raised by a single mom and stepfather in San Diego was on track for a scholarship to the United States Naval Academy in Annapolis, Maryland.

“I was very interested in joining the Navy after high school. It was a big part of my life,” said Lubach. “NJROTC gave me a sense of purpose.” 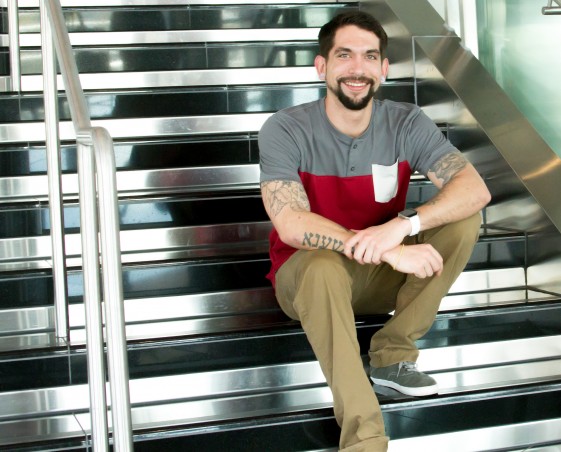 For most of Lubach’s high school education years he moved in and out of public and private intuitions including homeschool due to substance abuse and bad behavior.

“I chose a lifestyle that I couldn't get out of.” Lubach opened up about his academic journey sharing his battle with depression and addiction. “I put my family through a lot. It was difficult for my mom to watch me struggle. So I ended up at a boarding school in Arizona.”

Just months following his high school graduation, Lubach found himself without a place to sleep when he returned home to San Diego, finding shelter at the Mission Valley Riverbed and bathing at the nearby Starbucks.

Lubach’s life turned around when he was admitted to the San Diego Rescue Mission’s (SDRM) 12-Month Residential Recovery Program, a rehabilitation service that guides men in need with therapy, vocational training and educational classes.

“Not even six months after I entered the Mission I was selected to learn a trade at San Diego Continuing Education.”

“I'm holding on to this opportunity and grasping it with both hands.”

In 2016, SDCE, the largest provider of noncredit education in California, announced its pilot partnership with the charity, dozens of families who stay at the SDRM located in Downtown, San Diego are looking for emergency shelter, hot meals, transitional housing, recovery counseling, and now, education and potentially hands-on job training.

“These men were hand-selected from a competitive pool that showed the most promising potential for success,” stated Carlos O. Turner Cortez, Ph.D., President of SDCE. “Once the students complete their career training programs, we will work with the San Diego Workforce Partnership and SDCE employee partners to find jobs for students.”

Lubach considered a career in plumbing.

“I was worried about being inside a classroom after being on the streets for a while but I started thinking about what I could do to provide for my future and my family.”

According to the Bureau of Labor Statistics, the median pay for a plumber is $24.74 per hour.

“I no longer have to worry about stealing something just to eat or where I will rest my head the next day,” said Lubach.

While staying at the Mission, Lubach has been reunited with his family for the first time since 2013. “This year was the first Thanksgiving, Christmas and birthday that I spent with them. It feels good.”

“Growing up my mother was my biggest fan and my stepdad took me to NJROTC, baseball and football practice. My stepdad entered my life when I was two and stepped up to the plate and provided for my mother and me. He is my role model. He has shown me what it means to be a man.”

Lubach’s mom earned an Associate of Arts Degree at San Diego Mesa College and his stepdad works in real-estate.

“Education and workforce go hand-in-hand and each contributes toward self-sufficiency and success,” said Carlos O. Turner Cortez, Ph.D., President of SDCE. “Our goal is to leverage resources and provide social and emotional support to help students achieve and to ultimately build a successful strong workforce for the region.”

“My instructor works all day in the trade and then comes at night just to teach us. Knowing that there are teachers willing to do that sparked a fire in me,” said Lubach

“By the third week of class we were talking about how to solder, braze and install pipe systems.”

Now 29, Lubach aspires to be a Journeyman Plumber within the next five years.

Lubach will complete SDCE’s free plumbing certificate program this summer and will participate in SDCE’s commencement ceremony at the Spreckels Organ Pavilion in Balboa Park on Friday, June 1.