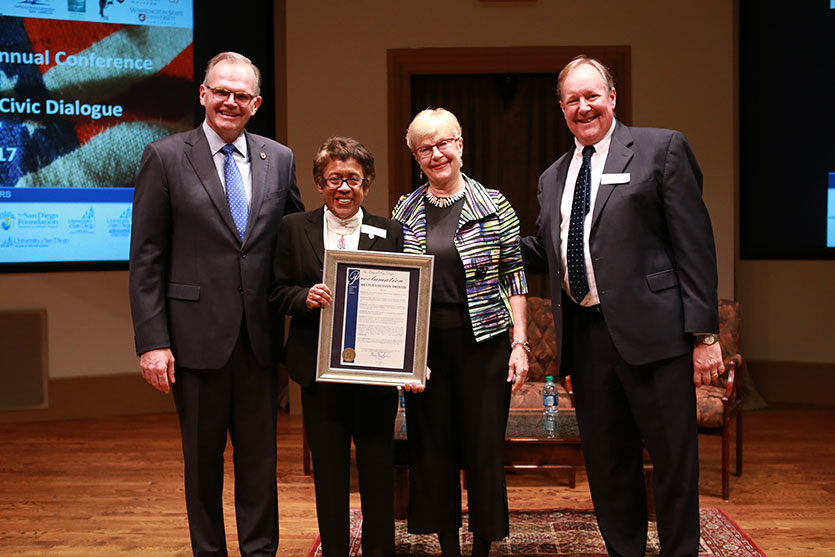 How do you find truth in an era dominated by fabricated posts on social media and photoshopped pictures that go viral? That’s the topic of the Restoring Respect and the Institute for Civil Civic Engagement’s 7th Annual Conference on Restoring Civility to Civic Dialogue from April 10-12.

“It used to be said you’re entitled to your own opinions but not your own facts,” said Carl Luna, a professor of political science at San Diego Mesa College who also serves as Director, Institute for Civil Civic Engagement and who will moderate the spotlight panel discussion. “The rise of ‘fake news’ as a tool of partisan and anti-democratic politics has challenged the very basis of the truthfulness of the facts we use in our community and national dialogues. You simply cannot maintain a democracy where we can’t agree on some basic facts about the world. Our conference is aimed at starting a discussion about how we get back to shared facts.”

Following is the lineup of activities during the week. All events are free and open to the public.

9 a.m. to 10:30 a.m.
“Tools for Being Media Savvy in an Age of Fake News”
Matthew Hall of The San Diego Union-Tribune will conduct a 90-minute workshop on distinguishing fact from fiction in news and social media.
San Diego Mesa College, Learning Resource Center 435, 7250 Mesa College Drive, 92111.

Breen captured the Pulitzer Prize in 1998 with the Asbury Park Press in New Jersey and in 2009 with The San Diego Union-Tribune. He earned his bachelor’s degree in political science from UC Riverside and was planning to become a history teacher when in 1994 the Asbury Park Press offered him a job in the paper’s art department. Two years later, he became the paper’s full-time editorial cartoonist, and The San Diego Union-Tribune hired him in 2001. Many in the industry foresee another Pulitzer when this year’s prizes are announced on April 16; his series of illustrations and biographies of people living on the streets of downtown San Diego in a series called “Street Art” has drawn attention from across the country.

12:30 to 2:30 p.m.
Sorting Fake News from Real News without Starting a Fistfight
Faculty and staff from the Institute for Civil Dialogue at Arizona State University will lead a session on how to lead a fact-based dialogue on campus, in your community, and in your organizations.

6 to 8:30 p.m.
“On Immigration and Journalism: A Conversation with Sonia Nazario”
This free and public event features a conversation between Pulitzer Prize-winning journalist and author Sonia Nazario and Studiotobe founder Joaquin Alvarado. Nazario lived in Argentina during the so-called Dirty War and was the youngest reporter to be hired by the Wall Street Journal, leaving the paper in 1993 to join the Los Angeles Times, where she wrote about social issues. In 2003, she won the Pulitzer for feature writing after a gripping, six-part series about the experiences of Latin American children who immigrate to join their parents in the United States. Her 2006 book by the same name expanded her newspaper series, became a national bestseller, and has been required reading at hundreds of high schools across the country.

Alvarado is the former CEO for the Center for Investigative Reporting who previously served as senior vice president for digital innovation at the Corporation for Public Broadcasting. This event is presented in partnership with California Humanities and the San Diego Community College District in association with the 7th annual Restoring Respect Conference. RSVPs can be made via Eventbrite.

9 to 10:30 a.m.
Pluralism and Journalism
Nazario will lead a presentation on pluralism, truth, and the modern era. Co-presented by California Humanities and the Institute for Civil Civic Engagement.

The Institute for Civil Civic Engagement is a partnership between San Diego City, Mesa, and Miramar colleges and the University of San Diego to encourage, promote, and increase civility in civic discourse. It grew out of Restoring Respect, an initiative led by a consortium of groups and organizations that include the San Diego Community College District, the University of San Diego, the Catfish Club, and others. With workshops open to high school and college students, this year’s Annual Conference on Restoring Civility to Civic Dialogue goes beyond any of the past six annual events.