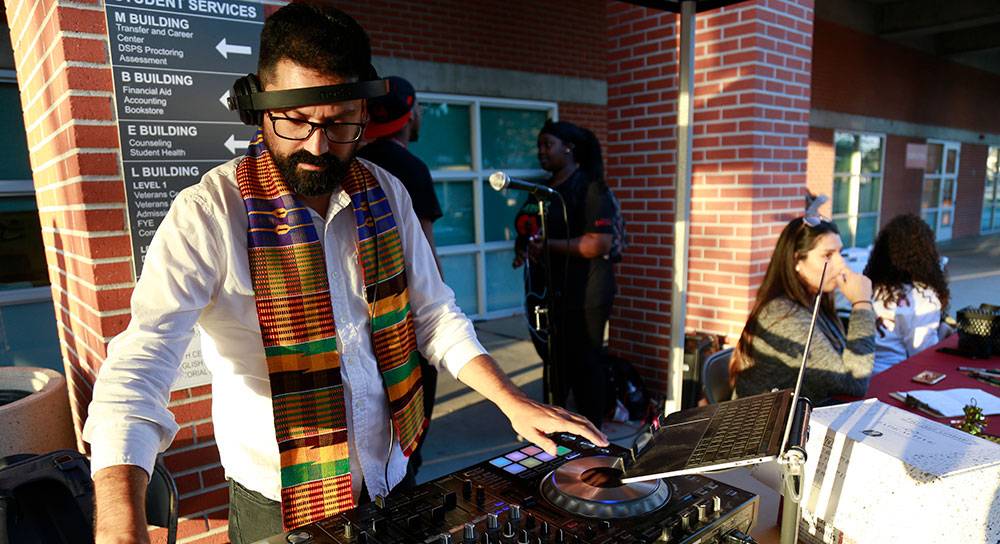 Dr. Roberto Rubalcaba isn’t afraid to think outside the box. He’s chopped up sushi to reinforce the concept of Riemann sums, incorporated music to hit the right notes in explaining the squeeze theorem, and used spray paint to illustrate continuous fractions.

His latest venture, Math Jam, is proving a hit both with math geeks and those who struggle with the subject. Held before mid-terms and finals, Math Jam is a giant study session aimed at improving math outcomes that attracts more than 200 students at a time and features Rubalcaba, who moonlights as a DJ at Bluefoot Bar and Lounge in North Park, using his skills at the turntable to reduce stress before the learning begins.

“The music draws a crowd,” said math tutor Kelly Giang. “People walk by and they’re just like, ‘What’s this music? What’s the hoopla? Why are all these people around here? Why is this professor DJing? Like, what’s going on?’”

Math Jam began evolving when Rubalcaba, who works closely with the campus Umoja program, sought to make his office hours less traditional and more of a cooperative affair infused with students helping students. Before long, more than two dozen students, including several serving as tutors, were dropping by his office to tackle binomials, coefficients, and linear equations.

“We all looked at each other and said, 'We have to do this again.' ”

“We really didn’t know what kind of turnout we were going to get,” Rubalcaba said. “We ended upgetting more than 100 people and filled up the entire Tutorial Center. We had music, people were dancing. It was a big party, really. I was blown away by how many tutors came out. I was expecting maybe 10 or so, but more than 40 showed up. It was more than a tutoring service, though. It was an event. We all looked at each other and said, ‘We have to do this again.’ ”

Math Jam starts with a “pre-jam” with Rubalcaba setting up his DJ equipment in the quad area and taking requests for music. Students are greeted by faculty, staff, and tutors as they sign up for the evening’s activities and are treated to pizza or snacks. Some break out into dance; others take advantage of the free tutoring to immediately tackle math homework. The formal Jam begins about an hour later when the Tutorial Center closes for the night and students start streaming in, grouped into clusters based upon their math course or courses. “It’s really a way for math students to all come together and have a big study session,” said math student and tutor Alante Fishel.

Data showed students who took part in a Math Jam in spring 2018 were passing intermediate algebra and geometry at a rate twice that of students who did not participate.

“I volunteer my time at the Math Jams because I love math and it is an incredible feeling to help those who are struggling with it,” said Dylan Morse. “I know that many of my peers in the higher math classes at City feel the same way, and Dr. Rob has given us an opportunity to help others by setting up these Math Jams.”

As a child growing up in Encanto, Rubalcaba, 43, never saw himself as a math instructor, let alone a college professor. Indeed, Rubalcaba dropped too many classes at San Diego’s Morse High School to earn a diploma, but he returned to school when enrolling at San Diego Continuing Education’s Center City Adult School to begin a journey he was hoping would lead to a career as an architect. After moving on to City College, he discovered a niche for math and served as a math tutor.

“I loved explaining math to other students, and I found it rewarding for students to come in confused and needing help but leave confident and happy,” he said. “That’s when I realized teaching math was what I wanted to do.”

Upon earning his doctorate in mathematics from Auburn University, Rubalcaba returned to San Diego and began teaching at City College. He is the first to concede math can be a challenge, but, he added, it shouldn’t be that way.

“A lot of the problems people have with math goes back well before college,” he said. “It goes back before high school, back before junior high school. There’s a lot of, ‘Why should I care? I don’t see any way that this will impact my life’ going on. But math isn’t an abstract subject, and a lot of my job involves teaching students why they should care and making math interesting to them. It means showing them how math is relevant to everything, including politics, polling, gerrymandering, elections. Once you see how important it is, the motivation follows.

“I really feel that I and all of the dozens of amazing student volunteers are making great strides in social justice to help so many students overcome their anxiety and struggles with math,” Rubalcaba continued. “As a bonus, this semester we have two new math majors who both used to hate math with a passion, and now they are majoring in it. One day, they will be teaching youth and changing lives."