In honor of Black History Month, a short ceremony will be held at the San Diego Mesa College Rosa Parks Transit Bus Stop to honor the legacy of Rosa Parks from 12:30 to 1:30 p.m. on Monday, February 4, 2019. 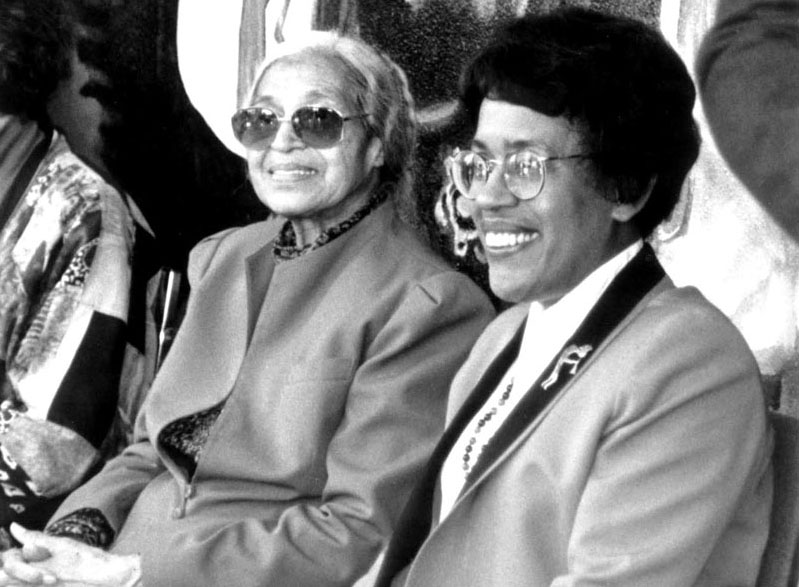 Rosa Parks at Mesa College in 1992 with Dr. Constance M. Carroll who was president of the college at the time.

To begin the event, participants will initiate a march from the Osani Circle in front of the Black Studies & Chicano Studies Department (G-103) at 12:30 pm. Students, faculty and staff will march together through the campus holding signs with messages of freedom and equality. The march will end at the Rosa Parks Transit Bus Stop where a ceremonial libation will be poured to honor Mrs. Parks, followed by presentations celebrating her legacy and recognizing the critical importance of social justice. Everyone is welcome to attend.

Rosa Parks was an iconic figure in the Civil Rights movement, owing to her civil disobedience in 1955 by refusing to give up her seat on a bus to a white person. Her activism sparked the Montgomery Bus Boycott as well as many other movements of civil resistance to injustice throughout the world. This memorial event is an annual celebration throughout the African diaspora.

Rosa Parks’ birthday falls on February 4, so Black History Month becomes the perfect occasion to celebrate her as well as anyone who takes an active leadership role in the pursuit of equality and social justice. Mesa College remembers Mrs. Parks’ many visits to the campus at the bequest of Mesa College Professor Emeritus, Elizabeth Hamilton. Her memory is memorialized in the edifice of the campus Transit Stop, which bears her name.