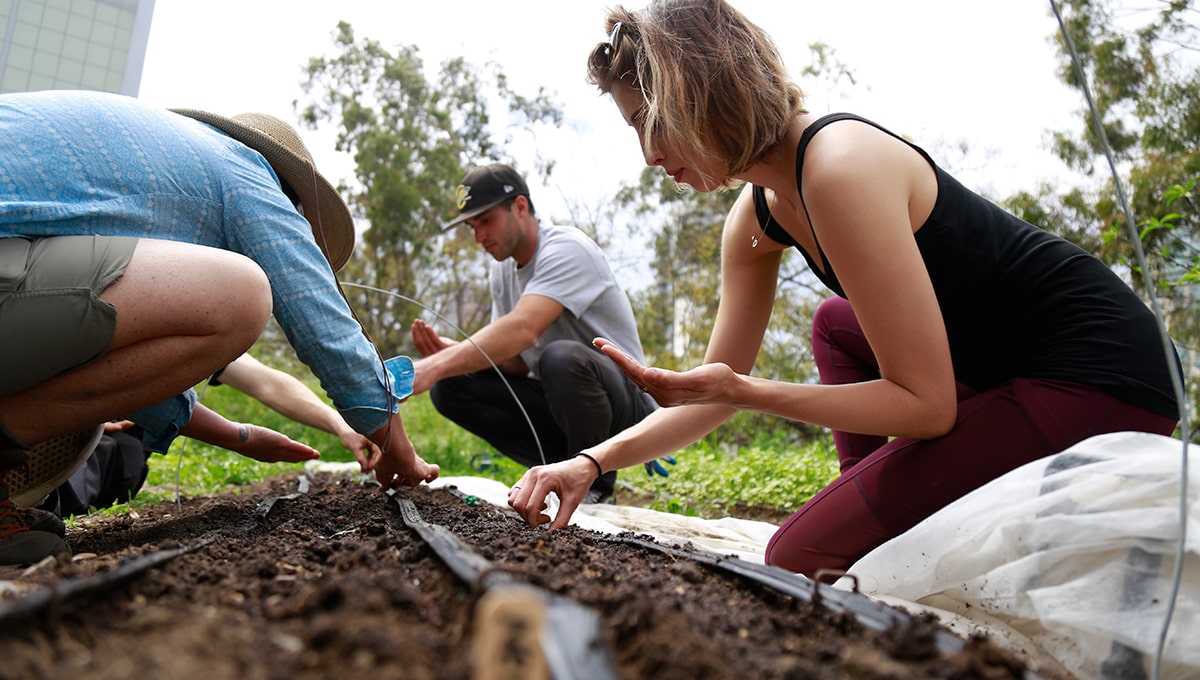 Sowing the Seeds of Success

Erika Pepper is a believer. A project assistant with a company that designs and installs green roofs throughout New York City, Pepper enrolled at San Diego City College’s Sustainable Urban Agriculture program largely because of its Seeds@City Urban Farm – an outdoor laboratory in the downtown core of California’s second-largest city that complements a science-based curriculum in modern classrooms just a steps away. Pepper’s quest for a unique urban agriculture program led her to San Diego City College for a certificate in Urban Gardening after securing a master’s degree in environmental studies at Tel Aviv University in Israel. 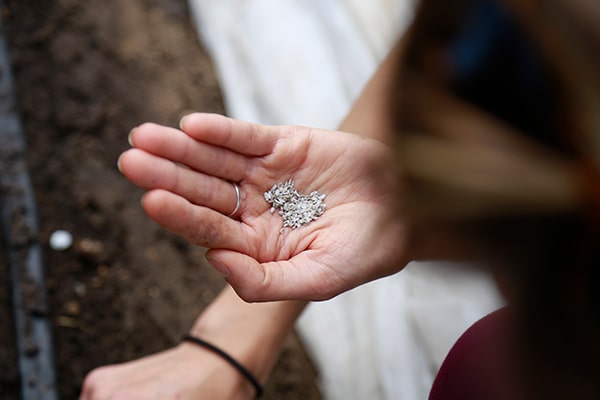 “The program was amazing,” Pepper said. “I had never had a community college experience before, and I was really impressed with what their expectations were. The standards were high, the educational quality was high, instructors had the kind of background I was looking for, and having the urban farm right there to serve as an outdoor classroom was invaluable.”

Indeed, Seeds@City Urban Farm is at the top of the class when it comes to urban agriculture programs at the community college level, and the Sustainable Urban Agriculture program is unlike any other in Southern California. Every agriculture class – which range from Introduction to Soil Science to Sustainable Urban Agriculture Practice – combine classroom study with hands-on experience, making City College a rarity among two-year institutions by offering laboratory experience on an operating farm.

Students collectively spend up to 800 hours each year working at Seeds@City doing everything from taking soil samples to harvesting produce.

“You’ll be taking a class in soil fertility and then you go outside and practice what you learned on the farm,” said Zach Spain, 34, who earned certificates in urban gardening and urban gardening professional and now works for San Diego-based Urban Plantations managing sustainable farms on corporate campuses in San Diego and Orange counties. Those farms, which are no more than a half-acre in size, grow up to 40 percent of the vegetables served in company cafeterias, and they underscore the impact City College’s Sustainable Urban Agriculture program is having.

“This is the future, and City College is right there,” Spain said.

Down on the Farm

Seeds@City Urban Farm comprises three plots where students grow seasonal fruits and vegetables such as kale, collards, Swiss chard, broccoli, cabbage, and sugar snap peas. Produce is sold to the campus community at a farm stand throughout the year. A plant and soil science laboratory, a kitchen laboratory, and classrooms are housed in a modernized building at the center of campus, and a modern rooftop greenhouse was installed this past November.

Seeds@City is just blocks from three major freeways. The main plot sits near the college’s Saville Theatre. An orchard is tucked behind the Harry West Gym next to state Route 163. Several raised vegetable beds are nestled on a patio next to the Science Building. Students say a side benefit of Seeds@City is the camaraderie that builds among those tending to the farm.

Seeds@City was created in 2008 through a partnership between San Diego City College and the San Diego Roots Sustainable Food Project. In 2010, the Sustainable Urban Agriculture program was launched, and Seeds@City Urban Farm became the outdoor classroom. The goal: to train the next generation of urban farmers in sustainable agriculture to build a food-secure city and a food-secure region.

The program’s pioneers noted how sustainable agriculture had been gaining attention and respect in recent years, not to mention the growing demand for professionals trained in that approach. Southern California was especially lacking in training opportunities for those interested in pursuing a career in sustainable agriculture.

The Sustainable Urban Agriculture program later became part of the college’s Department of Life Sciences, and significant upgrades were made to the curriculum to boost scientific rigor, improve job readiness, and prepare students for transfer to university programs.

The Associate of Science Degree for Transfer in Agriculture Plant Science addresses the latter goal and is tailored to anyone looking for a career as a plant biologist, plant researcher, soil scientist, greenhouse manager, or in a related field. The Associate of Science Degree in Sustainable Urban Agriculture is aimed at anyone aiming for an associate degree but who is not interested in transferring to a university to study plant science. That degree can help students for careers ranging from a nursery or farm manager to a crop consultant or organic certification specialist.

Urban agriculture has become increasingly prominent, with some estimates placing the growth of urban farms at more than 30 percent in the past 30 years, prompting the U.S. Department of Agriculture to produce an Urban Agriculture Tool Kit covering everything from business planning and risk management to soil quality and production strategies.

The U.S. Department of Agriculture projects that “U.S. college graduates will find good employment opportunities if they have expertise in food, agriculture, renewable resources, or the environment. Between 2015 and 2020, we expect to see 57,900 average annual openings for graduates in these areas.”

Zach Spain said he came to City College to get on a track leading to a career as a biologist. Those plans soon changed.

“I hit a wall when it came to math,” Spain said. “I had heard about the Seeds@City program, so I just randomly took a class and just fell in love with it. I love how the program incorporates science with agriculture, and I knew right away that I wanted to make a career of it. I started taking all the classes I could, I volunteered at Seeds and elsewhere, and I just soaked in as much as possible.

“My career is a direct result of Seeds@City and the Sustainable Urban Agriculture program,” he continued. “I would not have the position I have in a profession that I love were it not for this program. It set me up for success in a really big way.”

Erika Pepper’s track was more direct. She moved here from Israel and enrolled in the spring of 2017.

“I chose City College because of its location. I had just gotten a master’s in environmental studies and wanted to work in the green roof industry. I felt that learning more about plants and plant care would help me to thrive in this industry. It has absolutely helped me in several ways – client communication, job security, and when I went to get my professional green roof certification, I did not have to study for the plant section because I had already learned everything at San Diego City College. The most helpful parts of the programs were the on-site farm training that we were required to participate in in many of the classes I took. I also found the plant science topics very helpful. I believe that City College has a great urban farm and orchard and thought it was really cool that they had a program to sell the produce that we grew.”

- Involving courses unrelated to sustainable agriculture – including sociology, biology, and more – to utilize Seeds@City as an outdoor learning space on topics of sustainability and life sciences.

- Providing field trips for children at the San Diego City College Child Development Center for lessons on farming and food.

- Ramping up yields to bolster access to fresh food.

Said Assistant Professor Erin McConnell, who manages the program: "I moved to San Diego from Zambia, where I lived for three years teaching agriculture and fish farming, and I never expected that I would be able to continue to teach agriculture in this type of urban space." 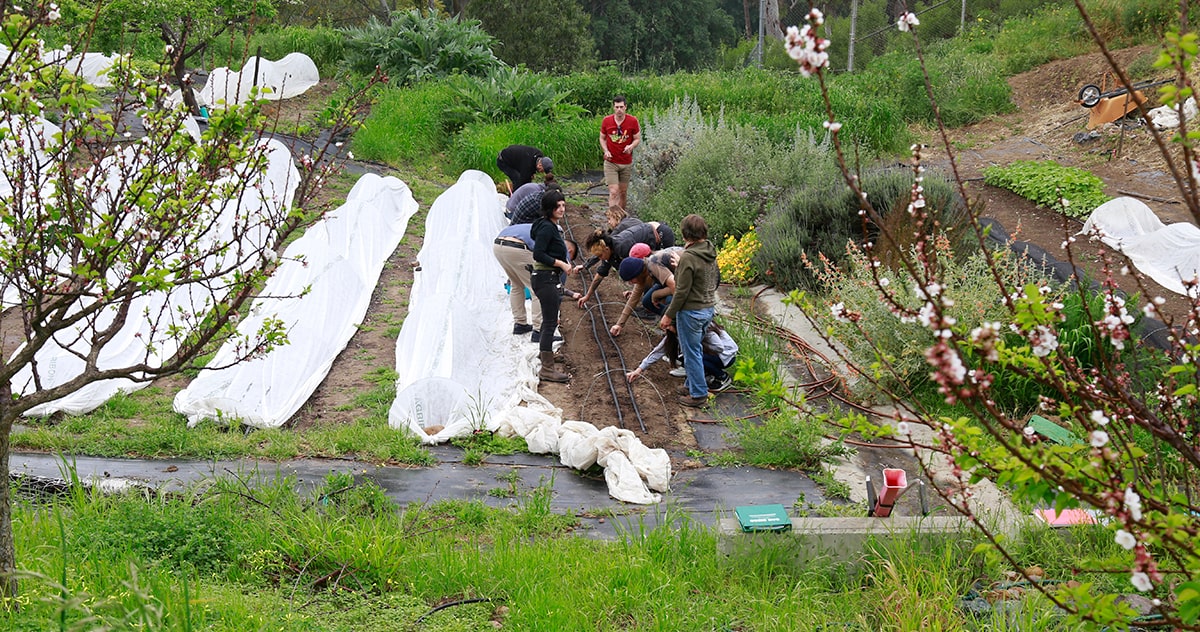