Special report to the public:

Trustee Sean Elo-Rivera virtually attended the Promise Development Committee meeting on June 10 and remarked that funding continues to increase in support of the program. He congratulated Student Trustee Taylor Carpenter on her election to a second term, as well as the new Student Trustees Destiny Munoz-Gallegos of City College and Sanam Azai of Miramar College. Trustee Elo-Rivera also recognized the leadership shown by SDCCD students, through social media and in marches, to make sure society addresses with more seriousness the need for change relating to systemic racism, specifically acknowledging two Mesa College students, J.J. Floyd and Kandyce Cole,  who shared their stories in a June 4 San Diego Union-Tribune article.

Trustee Mary Graham welcomed the new Student Trustees. She reflected on her concerns about recent violence against peaceful protesters and  members of the press and expressed optimism that this difficult situation can result in positive outcomes, such as the recent improvements made by SDSU in its Criminal Justice Program.

Trustee Craig Milgrim reported his involvement in a recent virtual meeting with the Leadership Circle of the San Diego LGBT Community Center where he learned about programs designed to help individuals negatively impacted by COVID-19. On June 12 he will meet with Cris Sotomayor of The Center, who is working in partnership with City College to help enroll residents of the organization’s Sunburst Youth Housing Project.

Trustee Bernie Rhinerson reported that recent events have been disheartening, but that there seems to be a momentum that may lead to meaningful change. He stated that he attended the California Community Colleges Chancellor’s Office June 3 virtual Call to Action where six items were put forth to focus on for change, one of which was the need for all governing boards to review their student equity plans, and indicated that the SDCCD Board will review its plan again at the July meeting.  He also complimented Trustee Maria Nieto Senour on her recent national podcast for the Association of Community College Trustees (ACCT).

Trustee Maria Nieto Senour participated in a June 10 news conference along with San Diego County Supervisor Nathan Fletcher, San Diego Unified School District Board Vice President Richard Barrera, and others from the community, and talked with Univision regarding the Schools and Communities First property tax initiative that will be on the November ballot to discuss the importance of funding for community colleges.

Chancellor Constance Carroll reported that negotiations between the California legislature and the governor are underway in their effort to agree upon a budget for FY 2020-21 by the deadline of June 15. Due to the COVID-19 pandemic, the state faces a $54 billion budget deficit, which will be addressed by significant budget cuts, as recommended in the Governor’s May Revision, by deferring payments to local institutions, as the legislature prefers, or by a combination of both approaches. The Chancellor updated the Board on instructional formats during the public health emergency. She indicated that some laboratory and clinical components of classes, as well as first-responder classes, would be moved to an on-campus format. However, all other classes in the summer session and the fall semester will be conducted online. Dr. Carroll welcomed and introduced the new President of Miramar College, Wes Lundburg, who made remarks. She also thanked outgoing Miramar College Interim President Marsha Gable for her work at the college and presented a plaque from the District and the Board honoring her service.

Student Trustee Taylor Carpenter reported that she is pleased to have been elected to serve a second term as President of Mesa College’s Associated Students and as a Student Trustee, while welcoming two new female student trustees to serve with her. She also recognized the difficult times that the community and nation are facing and mentioned the passing of the Americans with Disabilities Act (ADA) of 1990 and subsequent ADA Standards for Accessible Design in 1991 as examples of how important changes designed to benefit one group can result in benefits for all. Student Trustee Carpenter closed by thanking the Board for its support.

At its regular meeting of June 11, 2020, which was conducted in a virtual format, the Board of Trustees:

- Heard public comments by Neill Kovrig of Continuing Education who read a joint statement on behalf of the Classified Senate Presidents stating the District has a  responsibility to combat systemic abuses, provoke and provide change, and work toward the goal of eliminating systemic racism; by Thekima Mayása, Professor and Chair of Black Studies Department at Mesa College and César López, Professor and Chair of Chicana and Chicano Studies Department at Mesa College who wrote a joint statement recognizing the establishment and vital role of Black Studies and Chicana and Chicano Studies within the SDCCD and asked the Board to reaffirm its commitment to these programs as the departments collectively strategize ways to uplift its students, faculty, and staff during this watershed movement; City College Academic Senate (AS) President Paul Alexander shared that the District has great responsibility for the training of police officers and that he believes that with an excellent Chancellor and Board of Trustees to provide leadership,  police training can be revised to include the tools necessary to treat all people with dignity; Mesa College AS President Manuel Velez shared that as a Chicano who grew up in a working class neighborhood, he stands with those who have taken to the streets to end systemic racism and police violence and that community colleges are very important to black and brown students; he thanked the Chancellor's Cabinet and others who have taken positions in support of those protesting and advocating for change; and Miramar College AS President Laura Murphy provided a report, that was read by Manuel Velez, that addressed actions by the college's Academic Senate, Classified Senate, and student leaders to address calls for a review of police training and curriculum design.

- Adopted a resolution denouncing systematic racism and affirming SDCCD’s commitment to black students and all students of color who have been subject to both overt and passive forms of racism.

- Following remarks by Chancellor Carroll and an in-depth report by Executive Vice Chancellor Bonnie Dowd, approved the Tentative Budget for FY 2020-21.  The total District Budget of $755,343,671 includes income, appropriations, and expenses for all District funds. The budget had been reviewed by the Board’s Budget Study and Audit Subcommittee (Trustees Bernie Rhinerson and Craig Milgrim).  It was emphasized that given the many variables yet to be resolved at the state level, the budget was the best plan under the circumstances to ensure the District’s solvency and ability to provide service to students and the community.

- Approved the appointment and contract of employment of P. Wesley Lundburg as President of Miramar College.

- Approved new or revised courses and programs by Vice Chancellor of Instructional Services Stephanie Bulger; and the District’s Report of Participation in the San Diego County Investment Pool for the period ending March 31, 2020.

- Accepted grants from the County of San Diego, Health and Human Service Agency (HHSA) Workforce Education and Training for the Mental Health Services Act (MHSA) Workforce Education and Training (WET) Public Mental Health Academy program at City College; from the California Governor’s Office of Emergency Services for the School Communications Interoperability Grant Program at Continuing Education; and from the California Department of Rehabilitation for the College 2 Career (C2C) program, and for the Cooperative Workability III program.

- Approved purchase orders completed during the month of April 2020; and various personnel actions including the certification of short-term personnel service effective on or after June 12, 2020, applications for the Reduced Workload/Early Retirement Program, and sabbatical leaves for the 2019-2020 academic year. 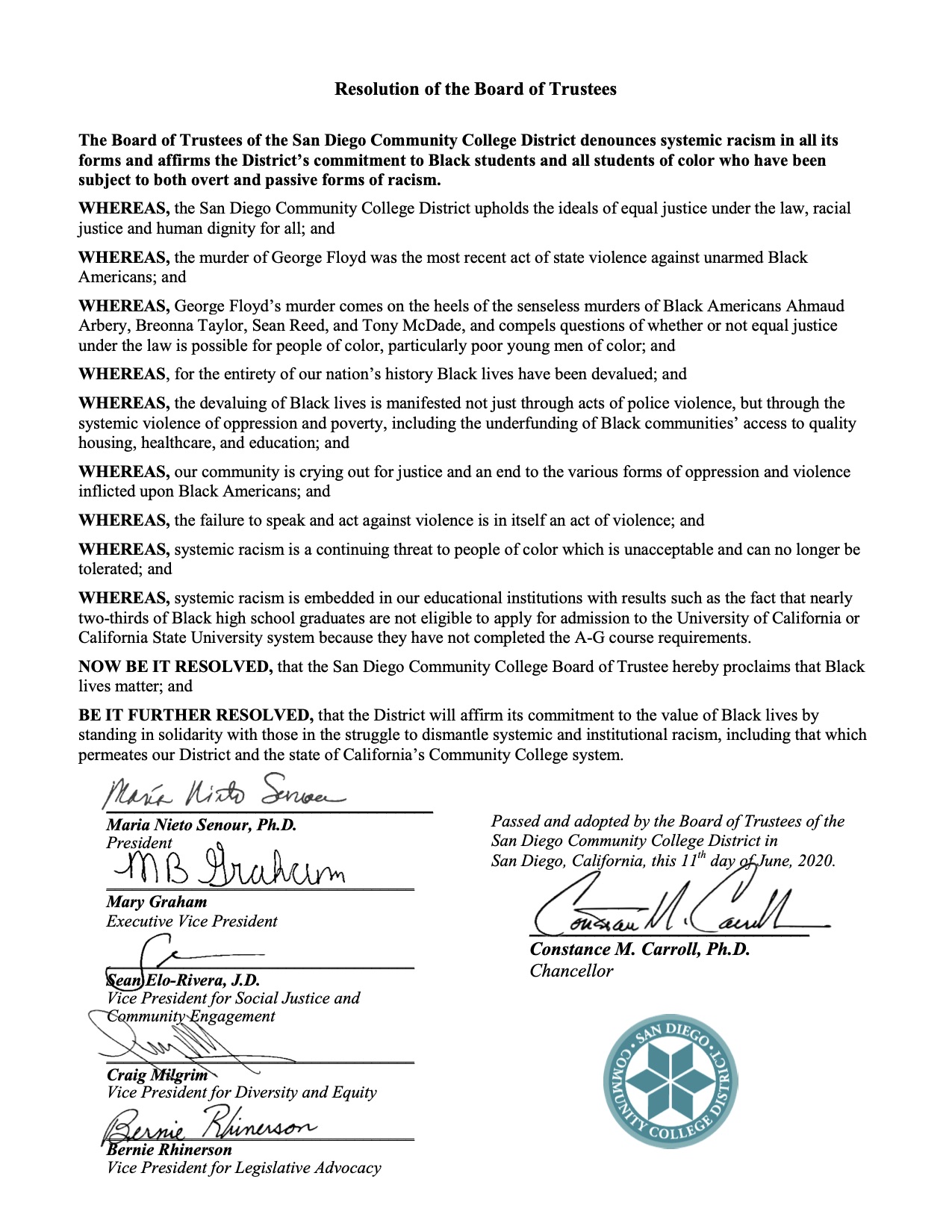