Spring 2021 edition of WE magazine online 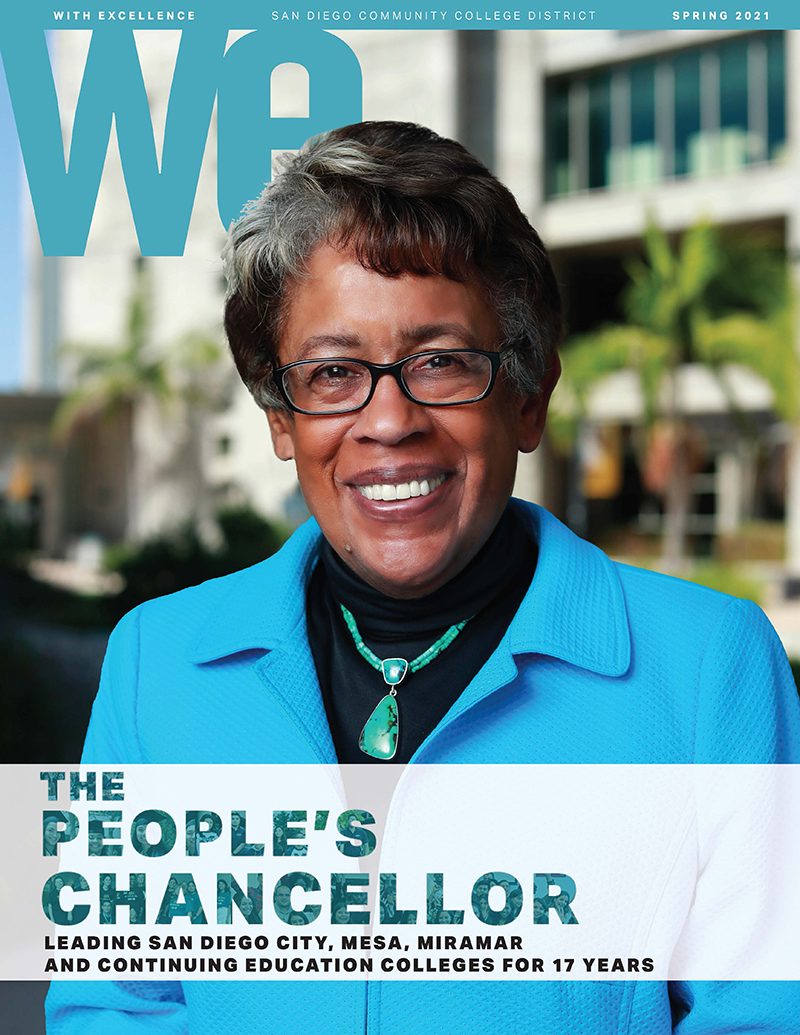 As the pandemic begins to wind down, The San Diego Community College District (SDCCD) prepares to say goodbye to The People's Chancellor, Dr. Constance M. Carroll after 24 years of service to the District, including 17 as chancellor. The SDCCD will welcome a new leader, Dr. Carlos O. Turner Cortez, on July 1, 2021. Projects during Dr. Carroll's tenure as chancellor include the transformation of District campuses, making higher education more accessible, and helping students expand their oppotunities while attending community college. This special edition magazine, which can be downloaded here, shares the stories of how those projects and plans have helped shape the future of the SDCCD:

- At the age of 31, she became the youngest community college president in America when she began working at Indian Valley Colleges in Marin County.
- When she was hired as Chancellor of the San Diego Community College District in 2004, she was the first woman and first African American to lead district.
- She is the longest-serving Chancellor at the SDCCD.

“Constance is a visionary,” said Board of Trustees President Maria Nieto Senour. “She is not only a statewide leader, but a national leader who has rightfully been recognized for getting things done.”

Dr. Carroll had significant contributions to many programs within the SDCCD, but some of those highlighted in the magazine include:

Two bond measures, Propositions S and N, provided the SDCCD with $1.6 billion to transform campuses throughout the District. Not only did the bond measures help build 43 new buildings but also brought numerous renovations to the college campuses. The District has been lauded for its prudent spending during the transformation, securing perfect marks on the San Diego County Taxpayers Association annual scorecard in 2016, 2018, and 2019, and near-perfect scores every other year.

Bachelor's degree programs at community colleges have expanded to 25 states, including California. Offering these programs at community colleges helps reduce the cost of a four-year degree to less than $11,000. The Health Information Management program at San Diego Mesa College is one of 15 community college baccalaureate programs in the state. There is new legislation in California that would eliminate the 2026 sunset date on existing baccalaureate pilot programs and allow for the number of such programs to grow throughout the state, which Dr. Carroll will continue to advocate for after her retirement from the District.

Since its inception in 2016, more than $1.9 million has been raised and 6,407 students have participated in the San Diego Promise. With the goal of making higher education accessible to all, the program offers free tuition, money toward books, and mentoring to ensure student success. Graduates of the Promise have described it as a transformative program that helped them achieve their educational goals.

The Next Chancellor of the SDCCD

Dr. Carlos O. Turner Cortez is ready to take the helm as the district's next chancellor. Among his numerous initiatives as president at the San Diego College of Continuing Education, Dr. Cortez implemented the Gateway to College and Career program, launched the fully online educational program ICOM Academy, and is committed to social justice and educational equity.

Read the latest issue of WE Magazine