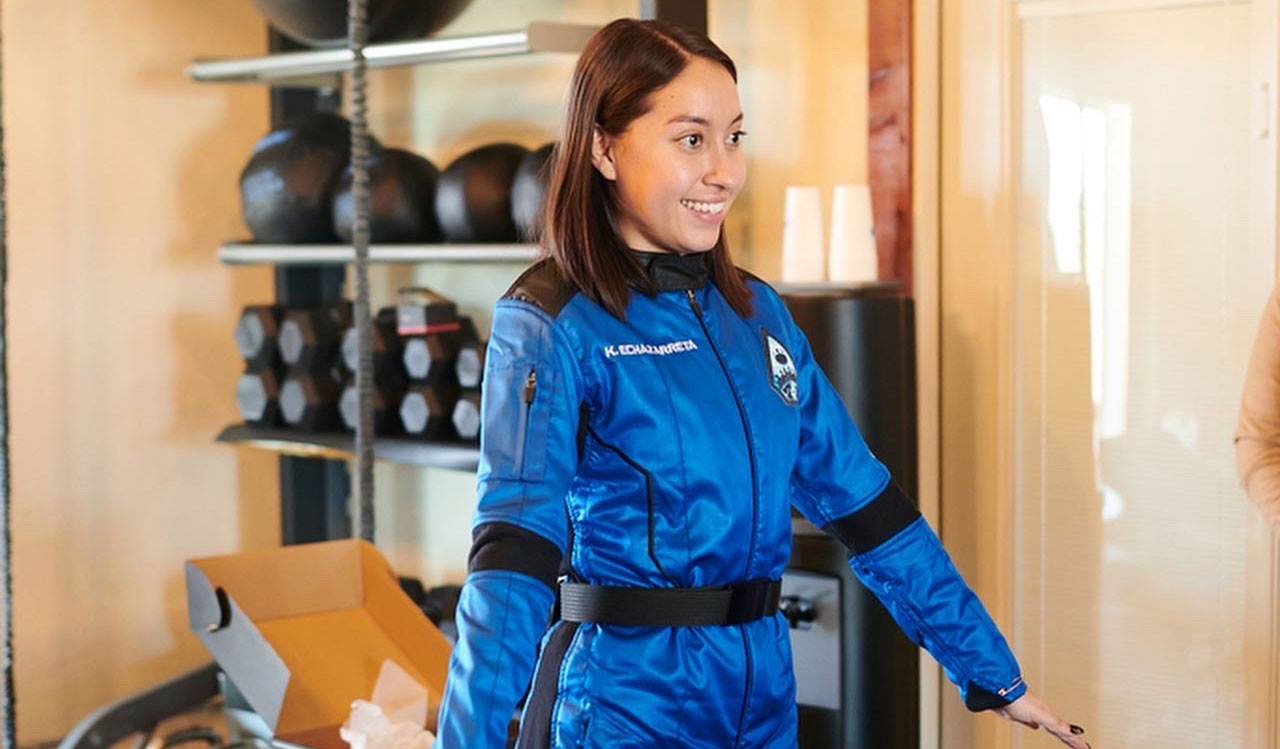 When the next Blue Origin rocket launches, two San Diego City College alumni will play a key role in the suborbital vehicle’s journey through space.

Gomez and Echazarreta’s journeys to and at City College have a lot of similarities ― although the two have never met ― and both attribute the education and support they received at the school for helping make their dreams of space flight come true.

“My experience at City College changed my life,” Echazarreta said. “I am eternally grateful for my City College experience. I finally was able to do what I wanted, take the classes I wanted, and join the clubs I wanted. And as a result, I flourished.”

Blue Origin’s New Shepard rocket is scheduled to launch from its Texas launch facility on Saturday, June 4 as early as 8 a.m. CDT. Originally scheduled to launch May 20, the initial flight was delayed during the final checkout. Blue Origin is the space rocket and tourism company founded by billionaire entrepreneur and Amazon Founder Jeff Bezos. Echazarreta, who will become the first Mexican-born woman and the youngest American woman in space, was selected for the journey by Space for Humanity, a nonprofit organization with a mission to expand access to space.

Echazarreta and Gomez both said their interest in space travel developed during childhood. Each initially struggled with math and science courses at City College until becoming involved with MESA (Mathematics, Engineering, Science Achievement), the program run by director Rafael Alvarez that provides academic support for students in math, engineering, and science majors.

“MESA taught me the importance of consistency and discipline to be able to always perform at a high level,” said Gomez, who has been a crew capsule systems engineer at Blue Origin since November 2021. In his current job, he supports launch operations and manufacturing for the New Shepard spacecraft, along with the parachute landing and astronaut life-support subsystems on the craft.

A lifelong passion for space exploration

Echazarreta was born in Guadalajara and came to the United States with her family when she was about seven years old. She said she was always interested in space, math, astronomy, and physics.

“Engineering has been my passion since high school, but I’ve known practically my whole life that no matter what I did, I wanted it to be in space exploration,” she said.

After graduating from Eastlake High School, Echazarreta decided to attend City College after she was not accepted into UC San Diego, UC Berkeley, and UCLA. After a failed physics test drove her to the MESA Program, she routinely made perfect scores on subsequent tests.

While at City College, Echazarreta was a Jack Kent Cooke scholar and was named the 2016 Association for Women in Science scholar. She later attended a summer program in science and engineering at Rutgers University before she transferred to UCLA.

In a website she created to assist other women in engineering, katechazarreta.com, Echazarreta said her transition to UCLA was initially difficult. She was getting poor grades and while feeling pressured to do well for her family and her Mexican roots, which led her to realize she needed to take care of herself mentally and physically.

“Today I am strong, I am direct, I am confident, and I feel valuable,” she wrote in an online post to other women considering an engineering career. “I love sharing this story because I was once in your shoes. Your dream job is absolutely achievable, but you must learn to love yourself, be kind to yourself, and no matter how hard it gets, to never allow anyone to convince you that you do not belong where you are or where you want to be.”

After graduating from UCLA, Echazarreta spent almost four years as an electrical engineer at NASA’s Jet Propulsion Laboratory in Pasadena. Echazarreta is now a host of the YouTube series Netflix IRL and appears as Electric Kat on Mission Unstoppable, a program produced by CBS, and is working on her master’s degree in electrical and computer engineering at Johns Hopkins University.

She said she is eagerly anticipating her flight and hopes that her experience helps to make space travel accessible to others.

“It truly feels like a dream. Every morning when I wake up, I have the beautiful experience of remembering that it is actually all real,” she said. “I hope that through this mission, people who felt like  this was something they couldn’t accomplish for themselves will realize the way has been paved and they can do anything!”

Shooting for the stars

Aerospace was always a part of Gomez’s life. He remembers getting a telescope for his 14th birthday and watching the planets and stars from his bedroom window. Although he knew he was smart, his grades suffered in high school as he struggled with his parents’ divorce and his own lack of discipline toward his studies.

A Google search for “community college” revealed to Gomez that an astronaut had attended community college and resulted in a clear path forward after barely graduated from Monte Vista High School after attending San Ysidro High School.

A City College counselor guided Gomez toward the MESA Program where he said the learning culture concepts he was introduced to helped him to be successful in his studies. He learned how to take notes in class and how to constantly monitor his progress in classes so he was not caught short at the end of the semester.

Gomez said Alvarez also taught him other important concepts outside of academics. MESA Program students often attended banquets with other local organizations, and Gomez attributes his ability to speak in public and other life skills, such as using the proper silverware during a formal dinner, to those events.

The decision to transfer from City College to USC in 2014 was influenced by the fact that Alvarez had earned his master’s degree there. During a tailgate party hosted by Alvarez, Gomez met an acquaintance who worked at an aerospace company, leading to a two-year internship while Gomez was at the university.

In his final semester at USC, Gomez was offered an engineering job in the advanced design division at Northrup Grumman. Gomez said he always wanted to be part of sending people into space, so, after four years with the company, he seized the opportunity to take his current job at Blue Origin.

Gomez stays in touch with Alvarez and participates in transfer workshops for students interested in attending USC. He attributes his success to starting his higher education journey at City College.

“I’m proud to have gone through the community college system,” he said. “I’ve always talked about community college and what a great option it was for me. In hindsight, I can’t imagine doing it any other way. I probably wouldn’t have survived.”

“Now it’s time to focus on getting me to space,” he said.