Thank you for signing up to participate in the San Diego Community College District Pride Parade float and contingent. We are looking forward to seeing you at Pride! For questions, please feel free to reach out to Luke Menchaca at amenchaca@sdccd.edu. 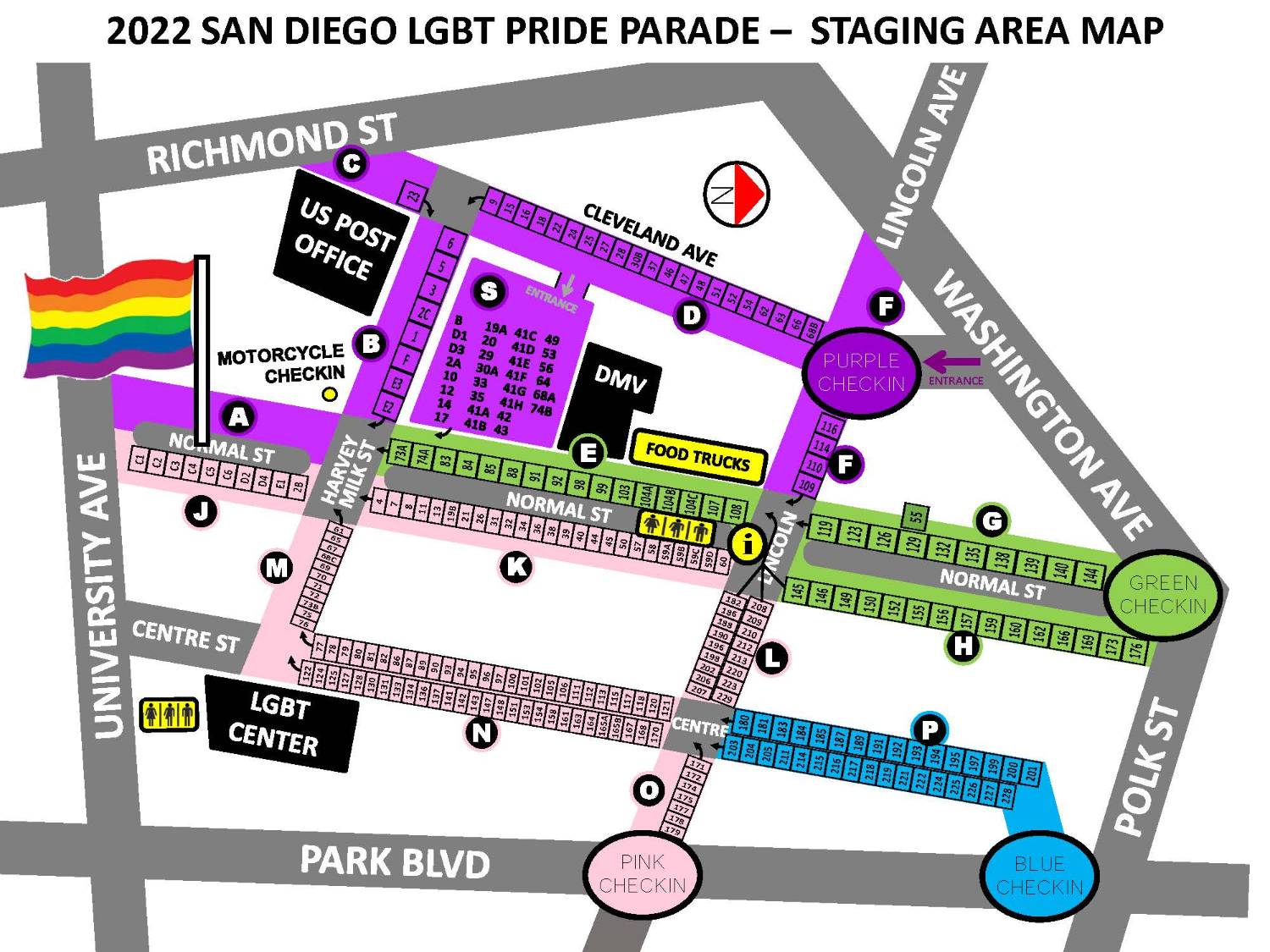 Getting to the Parade and Festival
There is FREE parking at the Old Naval Hospital on Park Boulevard and President’s Way.

Free shuttle service will be available from the Old Naval Hospital to the parade site. The free shuttle will drop people at the corner of Essex Street and Richmond Street, one block south of University Avenue.

Shuttle service will also be provided between Hillcrest and the festival site during and after the parade. The shuttle drop-off at the festival is on 6th Avenue between Juniper and Laurel Street.

Prohibited Items in the Parade and on Floats:
The City of San Diego and San Diego Pride parade regulations prohibit the following being used in the parade:

Throwing from Your Contingent:
Parade participants may not throw any item into the crowds. This means you may not throw items from your unit, float, or auto. Items may be handed out. NOTE: A penalty of $150 for each infraction will be levied. If your entry is pulled from the parade; entry fees will not be refunded or returned.

Contingent Monitor:
ALL contingents are required to supply at least one monitor for every 25 participants to assist SD Pride officials while the parade is in progress. Any contingent without a monitor will not be able to participate. Their role is to 1) assist in the safety, specifically keeping the area in front of vehicles clear of pedestrians; 2) assist in the movement and pacing of the parade.

Nudity and Obscenity:
Nudity and obscenity are not permitted as defined by California State Code, title 17.04.480 and San Diego ordinance SDMC 56.53(c). Violators may be subject to citation or arrest by the San Diego Police Department.

Solicitation:
Contingents are not allowed to solicit money along the parade route.

Drugs & Alcohol:
It is illegal to possess or consume alcohol or drugs while participating on City of San Diego streets, ordinance SDMC 56.54(a). Any illegal behaviors and / or violations of the law will not be tolerated in the SD Pride Parade staging, route, and dispersal area. You will be responsible for any fines, fees, arrests, injury, or imprisonment that may occur if you break these or any other laws. In addition, violations will be immediate cause for dismissal from the parade. Please discourage your participants from consuming any alcohol or drugs prior to or during the parade

About San Diego LGBT Pride:
San Diego LGBT Pride, a 501(c)3 nonprofit, is a volunteer supported and community based human rights organization. The specific purpose of this corporation is to produce civic, cultural, and educational programs, which support and encourage pride within San Diego's lesbian, gay, bisexual and transgender communities.

●      Diversity – being inclusive, accepting, and respectful of the differences of people who share our values.

●      Respect – valuing others by accepting individuality and demonstrating courtesy and mutual regard.

●      Honesty and Integrity – communicating information and being true to our values.

●      Accountability – being responsible for the effects and consequences of our words and action.

San Diego’s Pride Parade finds its roots in the original march held in June of 1974, when a four-hundred-person march / rally was held in Balboa Park.

The parade has seen history change and in turn has changed with history. After the rains poured down on the parade in 1990, it was decided the parade would no longer be held in June, but late July. In 1979, the parade was moved from Sunday to Saturday and in 2003 the parade had grown so large that its start time was moved up to 11 am.

In 2009, we celebrated the 40th Anniversary of the Stonewall Riots through our parade and in 2012 we celebrated the repeal of “Don’t Ask, Don’t Tell” with the first active duty military contingent marching in uniform, thus capturing the local, national, and global media spotlight. In 2014, we celebrated the 40th Anniversary of the San Diego Pride Parade. Despite the rain in 2015, our community remained strong and made the best of the situation by dancing, cheering, and celebrating many milestones, including Pride naming the transgender community as the Grand Marshal and the first youth marching band comprised of junior high and high school students from around the Southern California Region. In 2019, to accommodate the even larger number of parade contingents, the parade was moved up to 10:00 am and San Diego Pride became the first Pride in the world to have a military jet formation fly-over the parade route. Due to COVID-19, the 2020 and 2021 parades were moved from an in person live event to an online virtual parade. This year, we are very excited that you will be joining our 47-year-old tradition and become a part of San Diego Pride history!