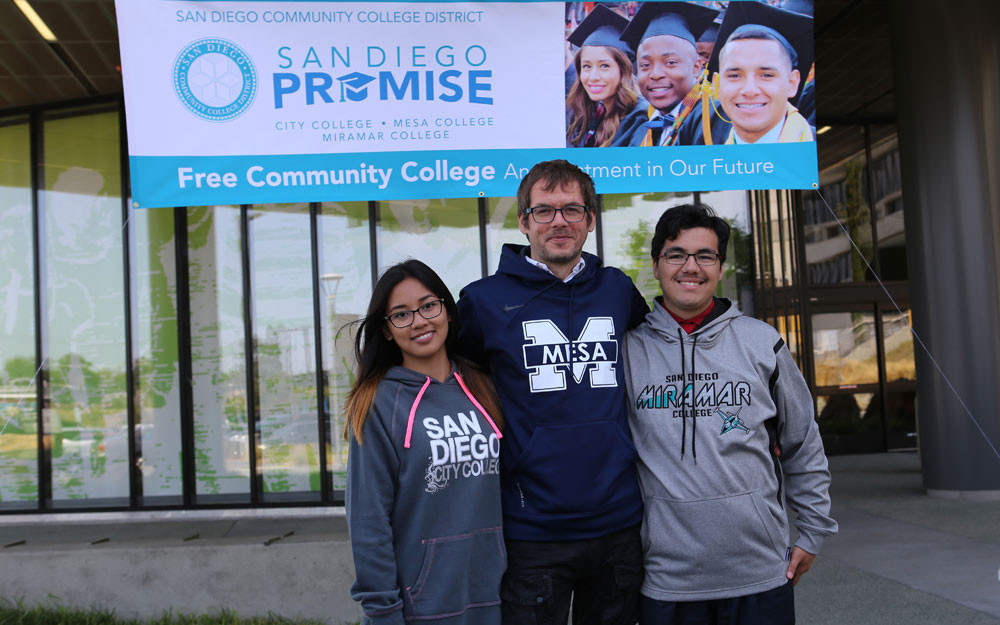 The deadline to apply for free tuition for graduates of the San Diego School District through the San Diego Community College District’s San Diego Promise program is fast approaching.  Applications for the program that pays for enrollment fees and books not covered by financial aid are being accepted through Feb. 10, 2017.

The deadline for the San Diego Promise’s 2017-18 academic year is nearing as a new poll shows a majority of Americans support efforts that waive college tuition for students who are academically qualified. The poll by Penn Schoen Berland for the Campaign for Free College Tuition found a 73 percent approval rate for state programs that eliminate tuition for those who are academically qualified. Meanwhile, several states have recently added or are proposing to add tuition-free programs. There are now more than 190 programs in 40 states.

The SDCCD launched the San Diego Promise pilot program in fall 2016, and will quadruple the number of students in the free-college program to nearly 800 for fall 2017. Participants are required to meet with counselors, develop an education plan, enroll in 12 units or more for both fall and spring semesters, contribute eight hours of community service, and maintain a minimum GPA of 2.0.

The pending expansion of the San Diego Promise means up to 600 incoming freshmen will be eligible this fall at San Diego City, Mesa, and Miramar colleges. That’s in addition to the 186 students who are currently enrolled in the program and expected to continue on to a second year next fall. Most of the new San Diego Promise students will be 2017 graduates from the San Diego Unified School District, though 75 will be accepted from San Diego Continuing Education, and 10 will come from the Monarch School for the homeless.

A recent analysis found that 9 of 10 students in this year’s San Diego Promise program are from underrepresented communities, and approximately half come from families with a household income of less than $40,000 annually.