Dr. Constance M. Carroll has served as chancellor of the San Diego Community College District since 2004. Throughout her chancellorship, Dr. Carroll has overseen an amazing transformation of California's second-largest community college district, including unprecedented student success and more than $1.4 billion in new construction activity. Along the way, she's earned respect for her leadership, commitment to academic excellence, and her reputation for collaboration.

We want to remind you that the San Diego Community College District is an inclusive organization, governed by a supportive Board of Trustees. City, Mesa, and Miramar colleges, and Continuing Education are committed to providing high-quality educational opportunities for all students without regard to race, ethnicity, cultural heritage, national origin, religion, immigration status, age, gender, sexual orientation, gender identity, medical condition, or disability.
Read more.

The 2019-20 budget development process for the California Community Colleges has been a unique experience since it is the very first budget development cycle for California’s new governor, Gavin Newsom. It has also occurred during a period of great concern about the efficacy of the California Community Colleges controversial “Student Centered Funding Formula,” which was introduced during the current budget year 2018-19, with adjustments being made repeatedly during the year.
Read more.

As you know, Gavin Newsom has replaced Jerry Brown as Governor of California. Although this “changing of the guard” will usher in some changes in fiscal and governmental policy, there will not be dramatic shifts in direction. Certainly, the new governor faces the same fiscal climate as the previous governor encountered, albeit with some improvements, and many of his proposed solutions will need to be similar, which is good news for the overall health of the California economy.
Read more.

San Diego Promise: A Solid Investment In Our Future - 7/2/2018
It’s hard to argue against improving access to college education, which is one reason why the free community college movement known as the College Promise is gaining in popularity across the country. Indeed today, a total of 16 states have statewide Promise programs; half of those states enacted their program in 2017.
Read More

Chancellor's statement on the elimination of DACA - 9/5/17
Today was a sad day in America when the Attorney General announced the Presidential decision to eliminate the Deferred Action for Childhood Arrivals (DACA) program, a program that provides support, especially educational opportunities, for young people who were brought to this country as children.
Read more.

Op-ed: America's college promise can be honored
America has been investing in public higher education since President Abraham Lincoln signed the Morrill Act of 1862 into law, an act that would forever change the course of postsecondary learning. And from the time that Joliet Junior College became the first public community college to open its doors more than a century ago, community colleges have played a vital role in training our nation's workforce and building our nation's economy.
Read more.

You have only to drive around San Diego and see that many of the cranes are working on the building projects that Constance, her board, and her team have set in motion, creating almost 10,000 jobs in the region. I congratulate Dr. Carroll on her ten years as chancellor. Our city is the better for her leadership. (Read More)

During the most challenging decade in the history of U.S. higher education, Constance Carroll has provided visionary leadership at both state and national levels. She has been especially innovative in managing her district's resources to maintain educational quality and to preserve student access. (Read More)

On behalf of the League for Innovation in the Community College, congratulations to Dr. Constance Carroll on celebrating 10 years of stellar leadership within the San Diego Community College District and the broader San Diego community. (Read More)

It has been my honor and pleasure to work with Dr. Carroll for more than two decades. During that time she has served as role model for me on multiple occasions. Her ever-present professionalism, calm style, and tremendous intellect make her one of California's and America's great educational leaders. (Read More)

Constance is a tireless advocate for those who seek to improve their lives through educational and economic opportunities. Through her leadership, the San Diego Community College District has established itself as a force for positive change. (Read More)

Dr. Carroll's fundamental strength as a community college chancellor stems from the fact that she is an academician at heart. She fully grasps that the main mission of the community college is to serve students and to ensure they participate in the best educational experience possible. (Read More)

Constance is not afraid to fight the good fight, and she usually comes out ahead, as she did when leading the statewide effort to equalize funding for all community college districts. When she speaks, people listen because she has the ability to make amazing things happen. (Read More) 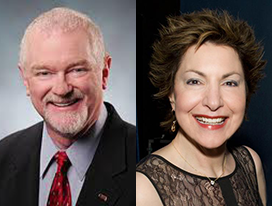 To whatever she undertakes, Dr. Carroll brings patience, extraordinary negotiating skills, plain common sense, and total dedication. She is one in a million. We are honored and blessed to call Chancellor Carroll a friend, colleague, and member of the Opera family. (Read More)

Constance Carroll is truly a modern renaissance leader. She leads with wit, honesty, and courage and is smart as a whip. Her expertise ranges from budgets to Beyoncé, from Greek gods to government code, from politics to opera. No one knows more or cares more about higher education and its power to promote our democratic ideals than Constance. (Read More)

On behalf of UC San Diego, I offer our collective congratulations to Chancellor Constance Carroll for 10 years of exceptional leadership of the San Diego Community College District. She is truly a visionary who champions education as the path to a better life. (Read More)

Dr. Constance Carroll has been a member of the Board of Directors of San Diego Youth Services (SDYS) for over 15 years. Despite her very busy schedule as chancellor, Dr. Carroll always finds time to lend her talent and resources to SDYS. Her dedication, commitment, and strong leadership has given hope and opportunities to thousands of youth in our community. (Read More)

I have known and admired Chancellor Carroll for several decades. She is a woman of remarkable vision and distinction! Together with our colleagues, we led the fight for community college equalization to put in place a funding formula based on the principles of fairness and equity. (Read More)

Chancellor Carroll is an excellent academician and CEO who is also very astute regarding the legislative process. Her statewide leadership is well known and has resulted in important achievements, notably the equalization of state support for community colleges. (Read More)

As a student trustee, I can appreciate the importance Chancellor Carroll places on ensuring access to excellence. Through her leadership, Chancellor Carroll is committed to the success of each student in the district. She is a remarkable woman who sets a wonderful example for others to follow. (Read More)

Constance Carroll is an extraordinary leader of education who recognizes people of all cultures in San Diego. For her unwavering support for the Union of Pan Asian Communities (UPAC), she was a recipient of UPAC's Leadership Award. It has been my honor to work with her in areas of community support for close to twenty years. (Read More)

The National Endowment for the Humanities congratulates Dr. Constance Carroll on her tenth anniversary as chancellor of the San Diego Community College District. Chancellor Carroll's anniversary is also a fitting moment to recognize her contributions and standing as an educational leader nationally. (Read More)

As a former student trustee of the SDCCD, I am fortunate enough to have served under Dr. Carroll. To say that Dr. Carroll is inspiring is an understatement. The way that she has overcome so much adversity to be where she is today highlights her work ethic, passion, and dedication. (Read More)

Constance and I share the belief that language is the fundamental medium of a culture. As an ardent classicist, she is able to bring ancient Greek culture alive through its language and literature, which she and I sometimes read together. Chancellor Carroll deserves to be honored for her years as a leader for education and for cultural literacy. (Read More)

Dr. Carroll's vision, integrity, and commitment have provided the leadership that has made it possible for the San Diego Community College District to improve the lives of thousands of people throughout San Diego. I truly appreciate her, and I hope we are fortunate enough to have her as the chancellor for at least another decade. (Read More) 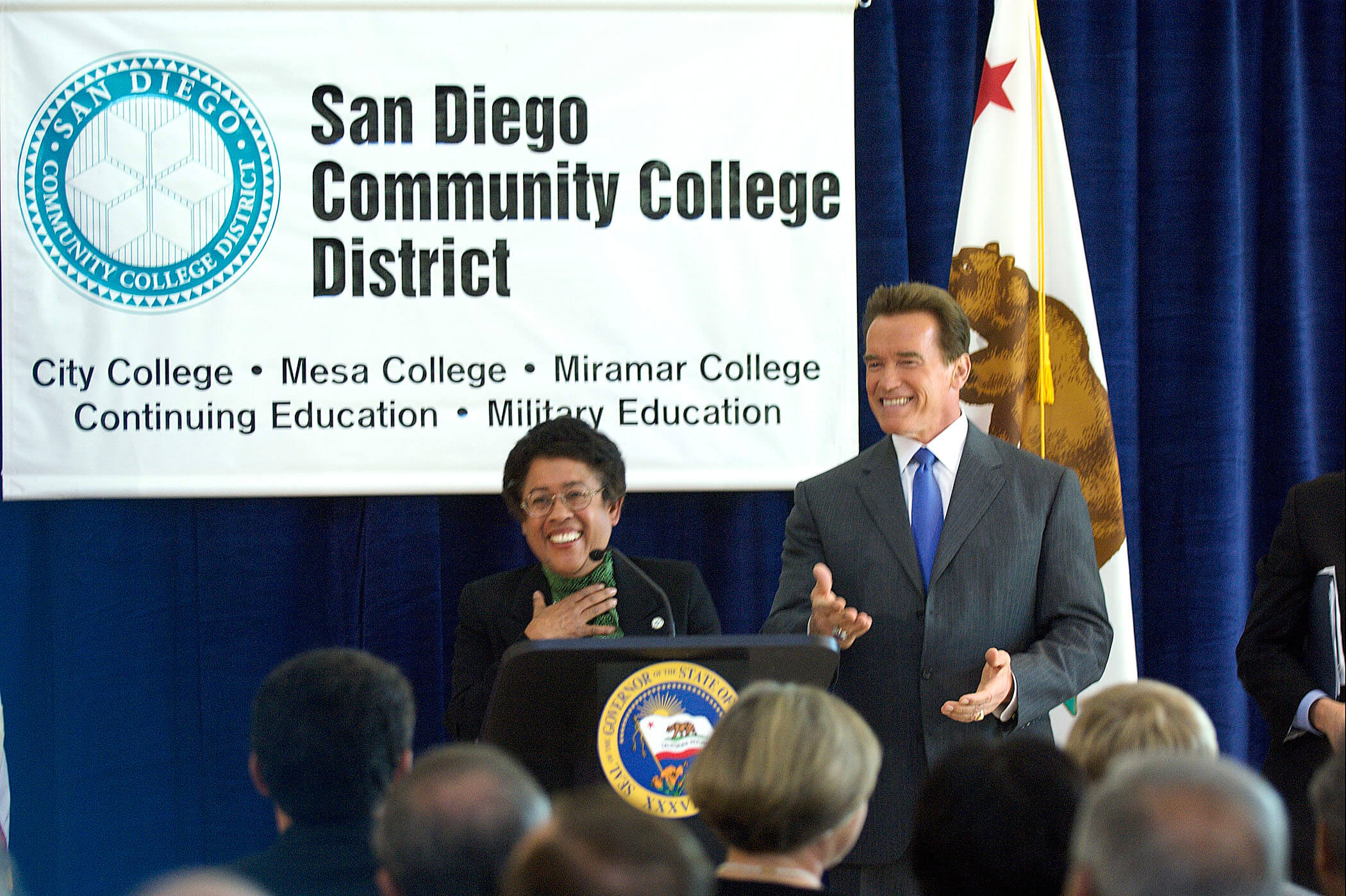